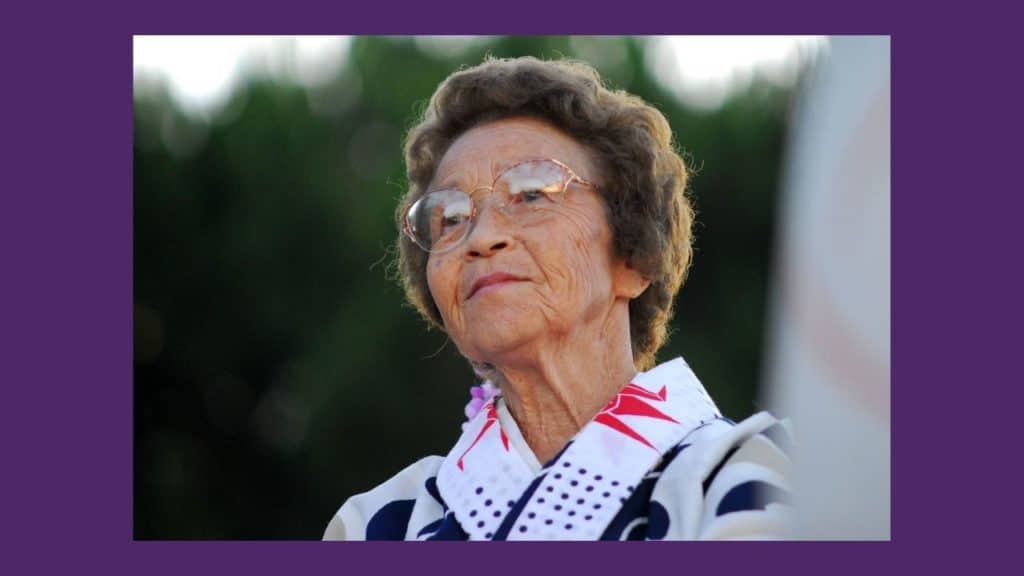 Frances Sawamura is well known within the Mountain View Buddhist Temple Sangha as a long-time Dharma School Teacher for the 1st and 2nd Graders, but she’s much more than that.  As a Super Senior (she prefers not to disclose her age), Frances is the definition of genki.  She’s funny, articulate and energetic.

Born Frances Idehara, she is a local girl who was born San Jose Japantown and raised in San Jose.  Frances had eight siblings – seven sisters and one brother and is the second youngest in the line of children.

When Frances was nine years old, Pearl Harbor was attacked.  Anti-Japanese signs were everywhere and many stores refused to serve the Japanese.  She had relatives in Northern California, so, in early 1942, the family moved to Palermo, CA (near Oroville).  Executive Order 9066 was enacted in April, and shortly after in July, the family was ordered to evacuate their home.  They boarded the train under military guard from Chico to Tule Lake.  All they were allowed to take was one suitcase per person – radios and cameras were confiscated.

When they returned from camp, Frances was 13 years old and their old home in San Jose had already been occupied by another family.  They were able to find a home in Coyote and lived there a short time.  In 1948, Frances’ parents found work on a farm in Milpitas, and from there, she attended Peter Burnett Jr. High, San Jose High School and was the first graduating class of James Lick High School in 1951.

After graduating from a vocational school in San Francisco as a dental assistant, Frances worked for Dr. Okuda in Mountain View.  One day, a handsome young man came to the office to collect a donation for MVBT.  His name was Tad Sawamura.  He probably noticed the bubbly, young dental assistant in the office.  They were later introduced at a YBA dance.  They dated for a few years and were married in 1957.  They remained married for 62 years until sadly Tad passed away in 2019.

Tad and Frances had three children: Steven, Jacquelyn and Jaimie, who all attended Dharma School.  She also has two grandsons – Scott is a nurse in Reno and Brian is in accounting in the East Bay.

After their wedding, Frances began working in Tad and his brother Shin’s (Doug Sawamura’s father) family business – Sawamura Brothers Wholesale Flowers growing carnations.  The business was originally in Mountain View, expanded to San Jose in the late 1960s, then consolidated to San Jose in the late 1970s.  The families retired after 35 years in the flower growing business.  After retiring, Frances went to work for Fujii Florist in Santa Clara for another 18 years.

While in Mountain View, their neighbors were the Tsukugawa family (Dennis’ parents), who were once in the floral business.  When the Tsukagawa boys outgrew their toys, they would share them with the Sawamura kids.  Frances still has a hand me down bicycle from the Tsukagawas.  Esther Bunya’s family also lived nearby.

In 1964, their son Steven turned six years old and Frances, along with Amy Imai, Esther Bunya and Aiko Sugimoto-Miyamoto volunteered as Sunday (as it was known then) School teachers.  At that time the Temple was looking for teachers and Frances said, “Little did I know what I was getting myself into at the time.”

Frances has taught for 56 years and is now teaching the 2nd generation of Dharma School students.

Traci Inouye states, “Not only was Mrs. Sawamura my Dharma School teacher and Mason and Kendall’s Dharma School teacher….I have the honor of teaching our Kindergarten and 1st Grade class WITH her now.  Just last Sunday, at our Zoom class, she did the closing Gassho…and I was moved by the sweet sincerity in which she expressed appreciation for the kids and led us in Namo Amida Butsu.  We are all so lucky to have benefited from her guidance all these years.”

Frances remembers the Temple not having enough classrooms, so plastic classrooms were built.  She said, “It was hot in the summer, but in the winter, the walls were filled with condensation and, so when the wind blew, everyone got wet.”  Her biggest challenge was staying up late on Saturday night (“I procrastinated”) to create a lesson for the children, but then have only two students attend.

When asked how she wants her students to remember her, Frances said, “Oh, yeah, wow!  Mrs. Sawamura was my Sunday School Teacher, too!”

Frances has met many wonderful people in our Sangha, but the people she’ll always remember would be Amy and Robert Imai.  We have been friends since 1957 and the families grew up together.  Amy was thoughtful and kind with a generous heart.  She had leadership skills not only in our Temple, but also with the Mountain View community.  The success of the Iwata City Sister City exchange students was largely due to Amy and Mr. Roy Ozawa’s energy, dedication and commitment to bring better understanding between our countries.  Amy, through her words and actions, taught Frances to be grateful and treat others with kindness and respect.

Besides teaching young children, Frances has been an assistant Odori instructor since about 1966.  Mrs. Yamakoshi from Palo Alto was the instructor at the time, then Marilyn Ozawa began her tenure as the instructor.  According to Marilyn: “Frances has been dancing with me from my start and more.  She is the tiny lady with unending energy and spirit and a joy to have with our Obon.”

Also known for her cooking skills, Frances’ favorite potluck dishes are barasushi and Spoon-Bread Tamale Bake.  Frances demonstrated her skills on a videotape for the recent Obon-at-Home event with her Ginger Chicken recipe.  Julie Satake Ryu says, “Personally, I would subscribe to a Sawamura Cooking You Tube channel!”

Frances is the epitome of the values of MVBT.  She teaches the Dharma to the young children, wants the Temple to maintain our traditions, is part of the interdependence of the Sangha, has experienced impermanence and compassion for the Sangha, and respects and protects the community.