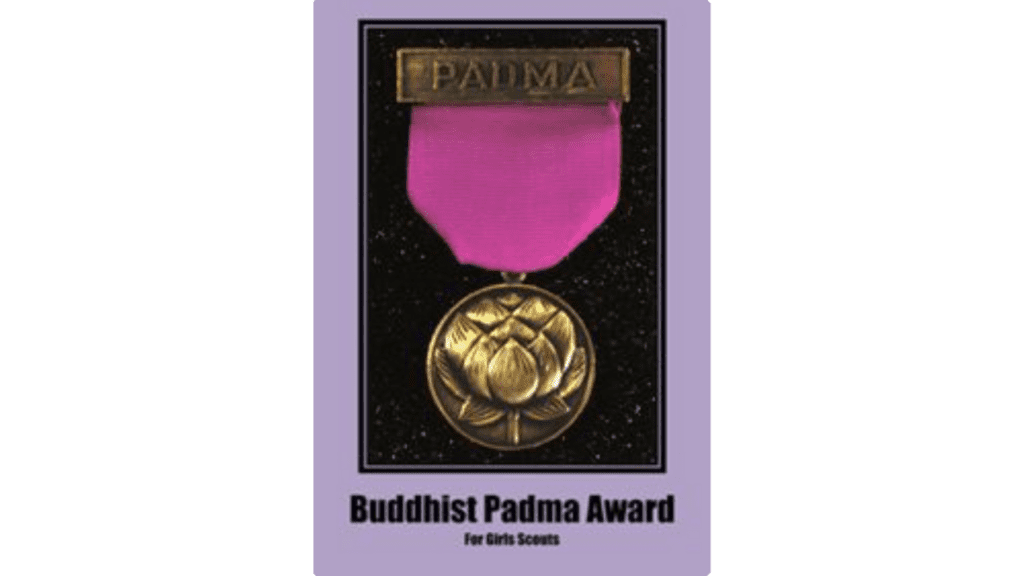 The Girl Scout Padma Award program allows a girl to:
1) attain understanding and faith in the Buddha,
2) learn the Teachings, and
3) practice the harmonious Buddhist way of life in the spirit of the universality of all living things.

A MVBT Cadette Padma Scout studies Buddhism for a minimum of 72 hours over the course of two years under the guidance of Rev. Mukojima and instructors approved by the National Buddhist Committee on Scouting.

*Note: This Dharma talk was originally planned for presentation at a Dharma School service during Girl Scout month.  Due to the COVID-19 pandemic and that the Temple is unable to hold in-person services, their talk was submitted to the Echo.

Hello, I’m Kendall and I’m here with Kiera and Kurumi to give a Dharma talk about the movie Wreck-It Ralph. Wreck-It Ralph longs to be as beloved as his game’s perfect Good Guy, Fix-It Felix.  Problem is, nobody loves a villain.  But they do love heroes…so when a modern, first-person shooter game arrives, Ralph sees it as his ticket to heroism and happiness.  He’s game – hops into the game with a simple plan — win a medal — but soon fails at his plan, and accidentally unleashes a deadly virus that threatens every game in the arcade.  Ralph’s only hope?  Vanellope von Schweetz, a young troublemaking “glitch” from a candy cart racing game who might just be the one to teach Ralph what it means to be a Good Guy.  But will he realize he is good enough to become a hero before it’s “Game Over” for the entire arcade?

I’ll be focusing on the beginning of the story.  Ralph feels jealousy.  He is jealous of Felix getting all the awards and praise.  Then, while trying to solve his own problem, he disrupts another game for his own selfish needs, making things even worse.  Even though he was warned not to, he still went through with his plan.  While trying to find his medal, he runs into Vanellope.  Then, Ralph uses her in order to gain his selfish wanting, which is the medal.  This would hurt her in the end.

This would represent the first half of the Four Noble Truths.  One, there is suffering and two, we are the cause of it.  When Ralph decided to game hop, he was being reckless and selfish.  Because Ralph didn’t come back to his original game for a while, his game was unable to go on.  No villain, no problem to fix.  He didn’t stop and think about how his actions would affect others.  Ralph was trying to follow the Third Noble Truth, we can end our suffering, but he did not follow with the last Noble Truth.  In order to end the suffering, we should follow the Eightfold Path.  He repeats this action when fooling Vanellope into getting his medal back.  He already was suffering in the shadow of Felix, then he caused even more with Vanellope. At the climax, Ralph sees the problems that he caused and realizes that he can go to the mountain to defeat the virus.

Ralph is trying to do the Third Noble Truth, we can remedy our own suffering, but he is causing more problems instead.  The Fourth Noble Truth is that we can resolve our suffering by following the Eightfold Path.  Kurumi’s section will explain more about the Eightfold path.

Hi, my name is Kurumi.  I am going to be talking about when Ralph did not see Vanellope’s side of the story and broke her car.  You might be wondering who Vanellope is.  Vanellope is a character who helps Ralph become a better person.  Building on to what Kendall said, about suffering.  I am going to talk about how Ralph continues to suffer when he doesn’t follow the Eightfold Path.  I’m also going to talk about how Ralph and Vanellope show impermanence & interdependence.

Ralph has been suffering because of being the villain in “Fix-it Felix.”  Ralph continues to suffer and makes everyone else suffer too.  How Ralph didn’t see Vanellope’s side of the story led to not using the Eightfold Path, Right View.  Ralph listened to the lie that King Candy told and that led him to not knowing the real story about Vanellope.  By believing King Candy, Ralph broke Vanellope’s car to stop her from entering the race.  After doing this, Ralph finally learns the Truth and how he was mistaken, and Ralph uses The Eightfold Path to save Vanellope and her game.

Some examples of the Eightfold Path from the movie are:

Right View – When Ralph saw what he was doing was hurting other people.

Right Thoughts – When Ralph saw that Vanellope could not go through the portal and could not be saved, he realized it was up to him to save the arcade.

Right Speech – When a group of villains from the arcade are having the therapy session, they say the motto: “I’m bad, and that’s good. I will never be good, and that’s not bad. There’s no one I’d rather be, than me.”

Right Conduct – When Felix left the game to find Ralph to save the arcade.

Right Livelihood – When Ralph accepts his role in the game as a bad guy.

Right Effort – When Ralph creates the light source to get rid of the virus.

Right Mindfulness – When Ralph realizes that he can stop the virus, to make up for all the problems that he caused.

Right Meditation – When Ralph realizes it is ok to have a bad image on the outside, but it does not mean that you are bad inside.

This movie shows both interdependence and impermanence.  Interdependence means that we all rely and influence one another.  Wreck-it Ralph showed interdependence by Vanellope entering the race to get Ralph’s gold medal back and Ralph helped Vanellope make her car and taught her how to drive to prepare for the race.  Impermanence means that nothing stays the same, everything changes.  Wreck-it Ralph showed impermanence by Ralph being the villain in the game, but after he saved Vanellope’s game he became a hero to Vanellope.  To talk about the climax and the end of the movie here is Kiera.

Hello, my name is Kiera.  Later in the movie, it’s revealed that King Candy was another character in disguise.  King Candy, previously known as Turbo, is a character notorious for invading other games, removing them from the arcade forever.  Turbo does not learn that he causes his own suffering because of his greed to become the greatest racer ever.  After learning that King Candy is actually Turbo, Ralph helps to evacuate people out of the deteriorating game and into a safer place.

While helping people evacuate, Ralph suffers as he watches Vanellope fail to go through the barrier to the power strip, which is safe from the virus.  As Ralph watches the world around him fall apart, he realizes that he caused all of the problems and his own suffering because he wanted to be a good guy and get a medal for once.  He then puts forth the effort and creates a deadly light source to attract all of the viruses from a mixture of Mentos and Cola from the mountain, saving everybody.  In the end scenes, Ralph mentions to Vanellope that he has a purpose, to wreck the building in the video game Fix-It Felix Jr.  He even improves the game Fix-It Felix-Jr. by incorporating lost characters such as Q*bert whose games are gone and overall helps other people find their place.  In the end, Ralph realizes that even though his character may be a bad guy in the game, he is not a bad guy outside of the game.  He is an integral part of the game and contributes to the bigger picture that is the arcade game, Fix-It Felix-Jr.  This represents the Four Noble Truths and how Ralph realizes that life is suffering, he causes his own suffering, and he can stop his suffering by doing things that conform to the Eightfold Path.

Buddhist Lessons within the Movie.  As you can see, we were able to find many Buddhist lessons within the movie.  Some examples are suffering, impermanence, interdependence and compassion.  Ralph is a great example of the Four Noble Truths and how he realized his first solution was making everyone suffer.  In the end, using actions that represent the Eightfold Path, he was able to see a better way to solve problems.

Please join us in Gassho