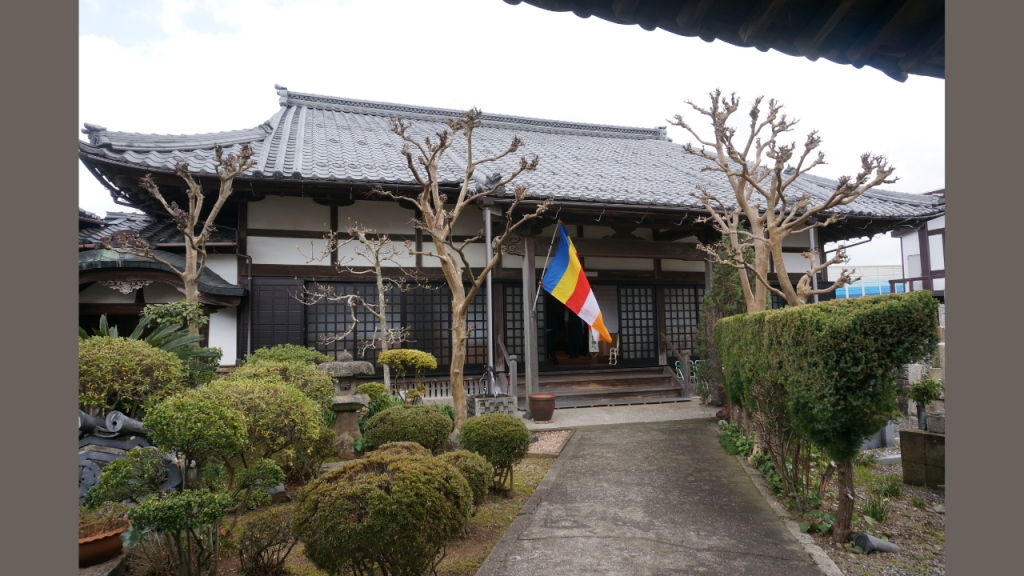 In my Dharma Talk last month, I introduced a proviso, described in the 18th Vow, which goes:

“Excluded are those who commit the five grave offenses and those who slander the right Dharma.”

In Jodo Shinshu tradition, this proviso is called Okushimon, which means the passage of deterrence. And it is very important for all Jodo Shinshu followers to regard the passage of deterrence as another side of Amida Buddha’s great compassion or his tough compassion that embraces all beings without exception.  And I mentioned that the Buddha’s use of the word “excluded” is much like a parent who scolds her child when saying, “If you do such a bad thing, I won’t care about you anymore!”  This month, let me retell a story I originally heard from my esteemed teacher.

Suppose that parents have a child who likes gambling or playing card games with his friends for money.  When he goes off to college, his parents might be more worried about him than lonely for him.  This is because they fear he might develop a gambling addiction and neglect his studies.  So as he is leaving for school, his parents, who know his character well, might threaten him: “Listen, if we find out you are gambling, we’ll disown you.”  The meaning of “disown” here is just like Amida Buddha’s warning of exclusion.  When the child hears that threat, he doesn’t want his parents to abandon him, so when he leaves, he says, “All right, I will be careful.”

Once he is away at school, he makes a lot of good friends. Suppose that one of them also likes gambling invites him to go to the casino together.  But when told by the son that if he gambles, he will be disowned, his friend argues, “Your parents are not here!  If you don’t tell them, they won’t ever know.”  So the son decides to go to casino with his friend the next day.  At first, he plays moderately.  But as soon as he won once and got a taste for it, he was eventually hooked.  Of course, the nature of gambling is that we can’t continue to win.  In the end, the student wasn’t able to let gambling go, so he even borrowed money from his friends to be able to continue.

Meanwhile, his parents receive a phone call from someone who wants them to pay their son’s debt.  Although the parents try to contact their son, he doesn’t answer his phone.  Concerned about his safety, they go to his apartment, but learn he hasn’t been there for a while.  After listening to all the details of their son’s behavior from those who know him, the parents desperately try to find their son, instead meeting some of his wastrel friends.  After much effort, they finally find their son.  When he sees his parents’ distraught faces, he becomes resigned and confesses everything that has transpired.

“As we feared, you’ve been gambling!”  Faced with this situation, what would you do if you were his dad or mom?  Would you abandon him, saying, “I warned you if you gambled, I would disown you.  So from now on, I will have nothing more to do with you!  Never come home!”  I don’t believe that you would say that.  I am sure that it is rare for a parent to actually disown a child.  The majority of you would go to those from whom your son had borrowed money, apologize for his behavior, and agree to shoulder his debts.  After that, you would tell your son, “I’m turning a blind eye to this matter this time.  You can come home to us for the Thanksgiving.  But you must never gamble again!”

Of course, I am aware that there are all kinds of parents, but I believe that most parent’s love for a child is just like this.  Therefore, the parent’s use of the word “exclude” means seeing through everything about their child.

Not To “Exclude “Anyone

In his writing, “Notes on the Inscriptions on Sacred Scrolls,” Shinran says:

By showing the gravity of these two kinds of wrongdoing, his words make us realize that all the sentient beings throughout the ten quarters, without a single exception, will be born in the Pure Land.

With these words, Shinran is pointing out that the reason Amida Buddha says, “Excluded are those who commit the five grave offenses and those who slander the right Dharma,” is because Buddha clearly shows the gravity of these wrongdoings.  Its intent is not to actually exclude anyone.

Because Amida Buddha deeply understands our selfish and evil nature, he admonishes us, “Please don’t act this way.”  Thus, this Buddha’s sincere wish became the word “excluded.”  So now we can clearly see the real intent of the word “excluded” used in the Primal Vow.  It is this unconditional and great compassion that saves all beings without discrimination, no matter what kind of people they are.  Amida Buddha will never abandon anyone.

“Excluded” by My Mom

When I was 4 or 5 years old, my mom and older brother took me on a bus at the end of year to go shopping.  We stopped by many grocery stores and shops to buy a lot of food and year-end gifts for the New Year season.  We bought so many things that my mom’s and brother’s arms were full.  On the way home, I was tired from walking and started to doze off on the bus.  When my mom saw me nodding off, she shook my shoulder and said, “Yushi, you cannot take a nap here now.  Wake up!” Because I didn’t open my eyes, my mom tried to wake me up, saying, “If you sleep here, I cannot get off the bus with you.  I’ll leave you here. I won’t care about you. You don’t like it do you?  Wake up, Yushi!”  But I seemed not to hear her and finally fell asleep.

A few minutes later, we reached the bus stop that we get off.  My brother was really afraid that our mom might really leave me in the bus.  But my mom picked me up and held me firmly in her arms though her hands were holding several shopping bags.  Even though my mom had warned me, “If you sleep now, I will leave you here.  I don’t care about you anymore,” she didn’t abandon me after all.  My brother told me much later that, only when he became an adult, did he fully understand that her words and actions on the bus that day were the expression of “excluded” as described in the Primal Vow.  That is, it was another side of Amida Buddha’s great compassion.

Reflect Deeply and Do Not Assume

In Jodo Shinshu, the most important thing is to receive Shinjin or to gain the entrusting mind.  It means to truly encounter the great compassion of Amida Buddha, which will never abandon any person.  Therefore, those of us who encounter the great compassion should always reflect deeply on our foolish nature and not assume that the five grave offenders and Dharma slanderers are someone else’s problem.  This is because we can express any behavior depending on the condition of our own selfishness.  I sincerely hope that all of us rejoice in and are grateful for the depth of Amida Buddha’s compassion, namely, the other side of Amida Buddha’s great compassion that opens a way of the Nembutsu, the way to the Pure Land for the sake of those like us and for the sake of all people.