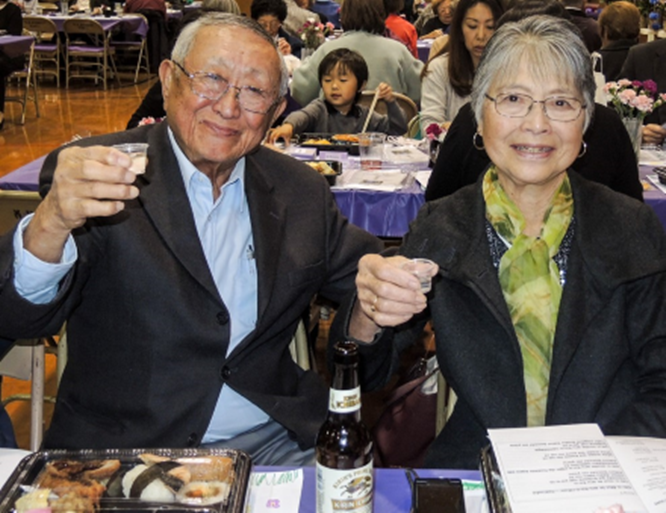 Last month in the May Echo, Rev. LaVerne and Helen Sasaki and their family were highlighted in the Super Senior Article that focused on their time at the Mountain View Buddhist Temple when Rev. LaVerne was the resident minister.  This article highlights their family life while at MVBT.

After becoming an independent temple in the Buddhist Churches of America, Rev. LaVerne’s father, Rev. Sensho Sasaki, became MVBT’s first resident minister from 1961 to 1972.  He passed away in 1972.  Rev. Sensho and his wife, Kinuko, were born in Fukui, Japan.  Rev. Sensho received his first Hongwanji assignment in the BCA in 1929.  He served at the Los Angeles Betsuin and the temples in Stockton, Tacoma, Placer, Sacramento, and finally Mountain View.  After Rev. Sensho Sasaki passed away, Mrs. Kinuko Sasaki remained in MVBT’s small parsonage (on the property now occupied by the storage shed) until her death in 1985.

Rev. LaVerne and Helen were both born in Stockton and delivered by midwives — a common practice in those days.  Rev. LaVerne is the oldest of five boys:  Conrad Senpo was born 1931, Louis Senryu in 1935, Senmaro in 1940 and Senrey in 1942.

Helen’s father, Frank Noriyasu Yokoi, was born in the San Francisco area.  His father was working in the fields as a farmer’s helper at that time that Frank was born.  Helen’s mother’s, Yuki Sato was born in Sacramento.  They owned a manju shop when Helen was born.  At some point, Helen’s mother and older sister returned to Japan.  Her mom’s oldest sister stayed in the United States, but she, too, eventually moved to Japan.

Rev. LaVerne completed his tokudo training from the Nishi Hongwanji and became an ordained Jodo Shinshu minister in 1958.  He returned to the United States and began his temple assignment in Stockton, followed by Mountain View and San Francisco.  He retired from the BCA in 2000.

Married Life and Raising a Family at MVBT

In 1960 or 1961, Rev. LaVerne and Helen began dating at the encouragement of both of their parents.  Helen remembers that “I knew about him and he was one of the resident ministers at the Stockton Buddhist Temple.  Someone talked to my parents and asked if I might be interested in meeting him more formally.  We talked it over and figured there was no harm in meeting.  We agreed, met, got along well, got engaged and were married on July 1, 1962, at the Stockton Buddhist Temple.”

Rev. LaVerne and Helen came to the Mountain View Buddhist Temple in 1971 and their five children grew up at the Temple.  Their youngest, Rina, was a baby when they arrived and became a college student when they moved to San Francisco.  Rina remembers that “All five of us were born in Stockton, but I was only 6 months old when we moved to Mountain View, so it will always be considered home to me.  My father loves to tell the story of how Yosh Nishimoto drove to the Stockton Temple parking lot to help us move and my mom was carrying me in her arms when he greeted us.  Growing up at MVBT was every child’s dream, because we had acres of land to play red light/green light, ride bikes, and it was the social center for YBA basketball games, conferences, dances, and the most epic Obon festival on the West Coast.”

Rev. LaVerne and Helen have five children and 13 grandchildren.  They are:

All five of the Sasaki children were involved in MVBT activities – from services to YBA to basketball.  Helen remembers that “when we first got to MVBT, our children were very young.  Most of the happiest events had to do with our children going to school and participating in activities that were of interest.  Our dog, Black Beauty, used to come into the Temple.  At first, people were kind of surprised, and I don’t think they liked it, but then they got used to him and he became part of the Temple group.”

Ellen said “My vacation memories are less about the destinations and more about the seemingly endless hours in our wood-paneled station wagon.  Crammed in the rear-facing 3rd row – without seat belts – we passed the time playing Simon and Cat’s Cradle, pumping our arms at passing big rigs (to request a honk) and hoping to catch Glenn Campbell’s ‘Rhinestone Cowboy’ on the radio.”

Rina recalls that “One of my most distinct, and terrifying, memories of summertime camping was screaming my head off while running through what seemed like a football field of grasshoppers jumping around us in order to get to the KOA pool.  There was always an igloo full of powdered Countrytime lemonade, which our mom faithfully made for us.”

The Sasaki family was close to the Higa family for many years.  Jean and Jits had kids whose ages were close to the Sasaki children.  The kids from both families did many things together, including going to school and playing basketball and baseball.  The Sasakis always used to laugh because their family members happened to be a little bit taller than the Higa family and would claim that we could beat them in sports.

According to Margie Higa Nishimoto, “Rev. Sasaki had the idea to host a church fundraiser basketball game – kidding of course – he called the speedy Higas versus the more talented Sasakis.  Although it never happened, every time I see Rev. Sasaki, he always mentions the basketball game and it always makes me laugh.”

Brian said, “My fondest memories were participating in scouts, track & field, baseball and basketball with not only the Higa family, but many others in the surrounding neighborhood.  Margie Higa would kindly offer rides to Mountain View High School before we had our driver’s licenses and the Sasakis were often late crossing Shoreline Blvd to Bailey Plaza.  I miss those simple, carefree years without the distractions of the Internet, smart phones and access to thousands of channels on TV.”

Norm Higa says, “I had lots of fun growing up with the Sasaki family in their ‘front yard’, going to school with them and doing all sorts of sports, church or scouting activities.  Now as an adult, I smile and think of our fond childhood memories and hope our kids are fortunate enough to have similar friends and positive influences in their lives.  I feel we, the Higas and Sasakis, took our individual paths, but still remain connected as one BIG joyous family and community.”

The Furuichi family were also good family friends.  Tom always invited the Sasaki kids to their swimming pool next to their nursery.  Stanton remembers that “going to the Furuichi swimming pool was one of my favorite and memorable activities as a kid.  I was a bit scared of the deep end and I distinctly remember my father humming the Jaws movie theme as I dove off the diving board.  And thankful for Grandma Furuichi giving us sweets as we left.  She was so nice to us.”

Passing of Father and Mother

Sadly, not all of the Sasaki memories at MVBT were joyous.  The sudden loss of Rev. LaVerne’s parents were extremely sad.  His father died of a stroke and his mother from a car accident.

Rev. LaVerne remembers that “My father and I conducted the March monthly memorial service the night before he was stricken.  After the stroke, he was in the hospital for 5-6 days before he died.  The day he had the stroke, I went to play golf but left early.  I called Mom to tell her I was home, and half an hour later, she called me back to say ‘Papa ga hen’ (something is wrong) and I rushed over.  Dad had told Mom he was tired, and Mom had been entertaining a Temple visitor while he slept that morning.  When I arrived, Dad was still in bed and wouldn’t wake up.  I called emergency and a fire engine came to take him to the hospital.  If we hadn’t quit golf early, Mom would have had to go through that all by herself.”

Rev. LaVerne’s mother used to jaywalk across Stierlin Road (now Shoreline) as most people did.  One day she was hit by a pickup truck and taken to the hospital.  Rev. Sasaki was at her bedside in the hospital.  She died a few hours later after enduring some pain and suffering.  Rev. LaVerne said “’Oya to shi no wakare’ (being together with your parent’s time of death) is important and comforting to the dying parent.  A fellow minister shared words of wisdom with Rev. LaVerne, “ ‘Alaya consciousness’ (deep consciousness behind regular consciousness in Buddhist philosophy) comforted her even if she didn’t hear me.”  The Sasakis were extremely grateful that more than 50 BCA ministers attended her funeral.

Thank You to the Sasaki Family

While the Sasaki family left the Mountain View Buddhist Temple 32 years ago, they remain grateful for MVBT Sangha’s involvement and support of their family.  MVBT Sangha wishes them many years of good health and happiness.