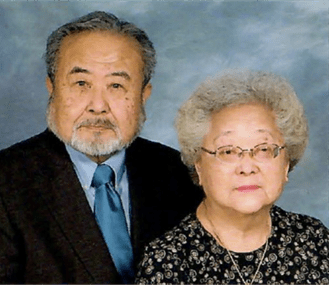 Milton Hamasaki and his late wife, Helen, have been strong supporters and active members of the Mountain View Buddhist Temple Sangha for decades.

He and Helen met in San Francisco in 1956 and were married in 1960.  They have three children — Craig (Betty) Hamasaki, Lori (Scott) Leonard and Karen (Danny) Kuniyoshi; and seven grandchildren — Erin and Lauren Hamasaki; Max and Maia Leonard; and Alyssa, Ty and Lia Kuniyoshi

Milton worked at United Airlines for 38 years from 1954 to 1993, first in the Maintenance Department, and then in the Inspection Department.  While at United, the family took several trips, flying around the continental United States, mostly on the East Coast, where they were all able to learn about the early history of the United States.  He also purchased a 16 ft. trailer and the family explored the West Coast.

Milton and Helen enjoyed their activities with the Temple Sangha.  The annual Obon Bazaar has always been a highlight of the year although his biggest challenge was serving as chairman in 1985.  He also started the Corn Dog Booth with Yuki Yamamoto and Aggie Hirotsu.  After chairing the Obon, he managed the Cultural Exhibit in the YBA Hall, which he subsequently passed to Peter Matsumoto.

Rev. LaVerne Sasaki and Hiroji Kariya asked Milton and Helen to join the Temple in 1972 and both remained strong influencers in the Hamasaki’s lives.

Milton and Helen enjoyed ABA activities and maintained strong friendships with the membership.  During his ABA times, Milton coordinated the Angel Island and the annual Bay Meadows Horse Racing trips.  Fellow ABA members, Bill and Joan Nishimoto said, “During early ABA days, Milton was our ‘dance master’, teaching us Western line dancing (Elvira) and the fox trot.  Milton also loved karaoke singing and belting out Frank Sinatra’s ‘My Way’.  At one of ABA’s installation parties, Milton and several of the guys dressed in Hawaiian grass skirts and performed a hula routine, calling themselves “The Dancing Oheso’s (belly buttons).”

In his early years, Milton was very handy.  He has his own workshop and made many items that are still in use today.  When autos were easy to work on, he did all the maintenance himself.  His son, Craig said, “I learned so much about auto maintenance and being handy around the house from my dad.”

Milton and Helen enjoyed ballroom dancing and going to class with many of their friends.

After retirement, Milton played the ukulele on Tuesday nights at the Yu-Ai-Kai in San Jose.  He eventually started bringing his grandchildren, Erin and Lauren, to the classes with him.

The Hamasaki children, spouses and grandchildren continue Milton and Helen’s legacy at the Temple.  All of the children attended Dharma School and were active in YBA where Milton would drive them to basketball tournaments and conferences.

The local grandchildren were also Dharma School students and YBA members.  Erin said, “I grew up going to YBA and Dharma School and it was great being surrounded by the warm faces who knew my Jichan and Grandma.”

When the Temple started Boy Scout Troop 87, Craig was one of the first members and Milton supported the Scouts by volunteering to drive them to their activities.

Thank You from the Temple

The Mountain View Buddhist Temple thanks the Hamasaki’s for their continued support of the Temple.  Sadly, Helen passed away earlier this year but she will be remembered for her smiling face, friendship and commitment to MVBT.  Once the COVID restrictions are lifted, we look forward to seeing Milton in person, reminiscing about Mountain View Buddhist Temple activities and looking

With Kindness and Gratitude beyond words