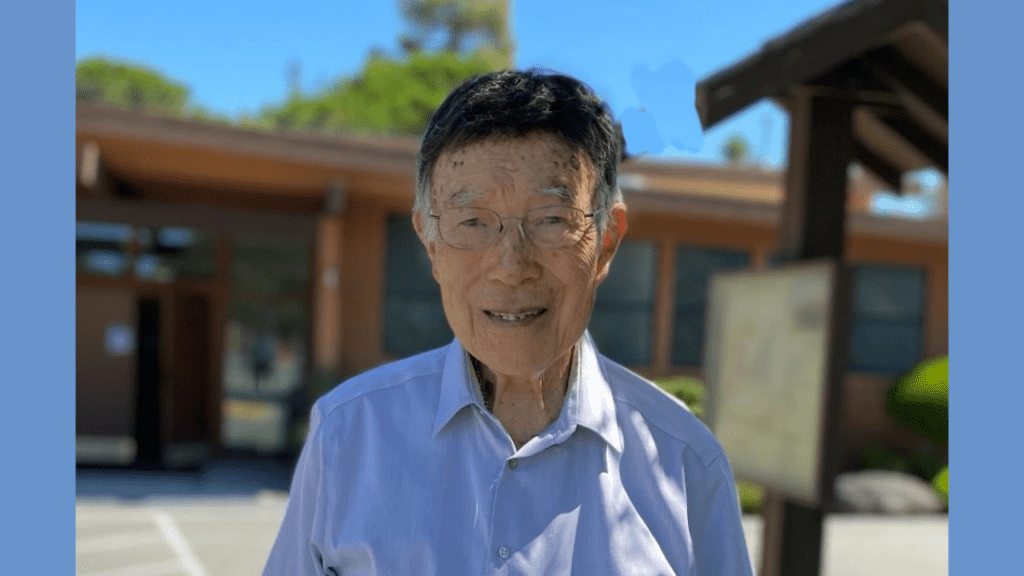 As a member of the Temple’s Oasaji group, Ed Tsumura often provides clarification about Japanese phrases or pronunciations.  Professionally, Ed Tsumura was an engineer during the early start of Silicon Valley, contributing to developments of semiconductor chips.  His background and skill with Japanese also provided a path toward a second career as a technical translator.  In July, Ed graciously agreed to be interviewed by the Senior Outreach Group’s senior memories project.

My father was a Shin Buddhist priest.  He decided to come to America as a Nishi Hongwanji-sponsored, overseas propagation minister and brought the whole family in 1925.  (Note that the U.S. Immigration Act restricting immigration from Japan had been enacted in 1924).  His first assignment was with White River Church in the state of Washington.  After that, he was assigned to Hanford Buddhist Church in Central California, where I was born.

World War II started in Europe in 1939 and the tension was escalating between the U.S. and Japan, too.  My dad wanted to unite his family in Japan (I had one older sister and one older brother, both born in Japan and in Japan at the time.  After the war, my brother came to the U.S. as a BCA minister) and he decided to take the next-to-the-last boat back to Japan in late July 1941.  So, I was in Yokohama in August 1941.  Taxi cabs and buses were running on steamed wood chips because of the U.S. oil embargo.  Nevertheless, my sister and brother came to greet us and we all travelled by train to Nikko for sightseeing before going back to Osaka-Wakayama region.

At school in Japan, they knew I was American born and I had no problem maintaining top grades in all of my English classes.  In the fall of 1944, I was 15 years old and, as a 9th grader, ordered to work at a local shipyard as part of national mobilization effort by the wartime government of Japan.  One day, during a break period, I came across a small detail of American POWs.  Since I was wearing blue jean pants, one recognized right away that I was American-raised and introduced me to a fellow POW from Sacramento.  He would pose questions like, “What do you think about this war?  Where do you think it is going?”  Obviously, Japan was losing rapidly by that time, so all I could do was to nod in agreement with his implied answer.

Any Nisei around my age and above who went to Japan right before the war started, probably shared similar experiences.  So, in a nutshell, my self-identity is not as a “Kibei.”  There are all varieties of Nisei who were sent to Japan before the war to be raised and educated, but the length of such period varied depending on individual circumstances, so one shouldn’t generalize.

Since I had no immediate relatives residing in the U.S., I had to wait until some of my parents’ close friends got settled down after returning from the Internment Camps.  In those days right after the war, the yen could not be converted to the dollar.  Luckily, the Nakatani family (Henry) agreed to sponsor me and sent me the money for boat fare, passport fee and a small amount of spending money for personal uses.  Thus, I was able to board an ocean liner, the President Wilson, and arrived at San Francisco in early April 1950.

I soon found a job at a Nikkei nursery (R. S. Yamane) in East Palo Alto growing chrysanthemums.  After 4 months of work, I earned enough to repay the money I owed for the boat fare, etc. and went to San Jose to enter San Jose High School as a senior.  Mr. and Mrs. Joe and Grace Akahoshi (Reiko Iwanaga and Rev. Ken Akahoshi’s parents) were my guardians.  San Jose Betsuin Church’s resident minister, Rev. Aso, found me a part-time job teaching in the church-affiliated, Japanese language school and a private room in the church-run hostel.

After Graduation from UC Berkeley

I attended and graduated from UC Berkeley using the GI Bill benefit that was granted to those who served during the Korean War.  Afterwards, I moved to Southern California for an engineering job.

While there, a couple of BCA ministers introduced me to a Sansei girl, Seiko Kawahara, living in Petaluma.  After several months of a long-distance courtship, I proposed to her at the Lawrence Welk Ballroom on the Santa Monica Pier.  We were married at the Enmanji Temple in Sebastopol.  Seiko was a very fine person, but she had some health issues and passed away rather young in 2001. Gassho.

Individuals Who Have Influenced Me

I’d put senior Rev. Sensho Sasaki and Mrs. Kinuko Sasaki first.  I had known them from the pre-war days in Walnut Grove when they were serving at Sacramento Buddhist Church.  Next to them, I would name Kei Hayame.  He was the Zone Chairperson at the time I joined the Mountain View Buddhist Temple and having served as Sunday School Superintendent not long ago, he asked me to join the Sunday School teaching staff, which I agreed to do.  After a while, Yas Shimoguchi (Jean Shimoguchi’s father) and I joined together to “team teach” the 7th and 8th Grade class.  Later, Rich Endo and Richard Fujikawa came aboard.

I have a deep respect for older Nisei members of our Temple.  Without the collective sustained efforts by them, we wouldn’t have a magnificent Temple complex and the vibrant Sangha organizations we have now.  MVBT has been blessed with leadership caliber members, too many to list here.  Perhaps, Hiroji Kariya would be one of the most prominent ones that are still alive and well.  I also admire the leadership quality and skills that the current generation of Temple Board of Directors exhibit.


PrevPrevious2020 OBON at HOME
NextWishing for a World Without Nuclear WeaponsNext