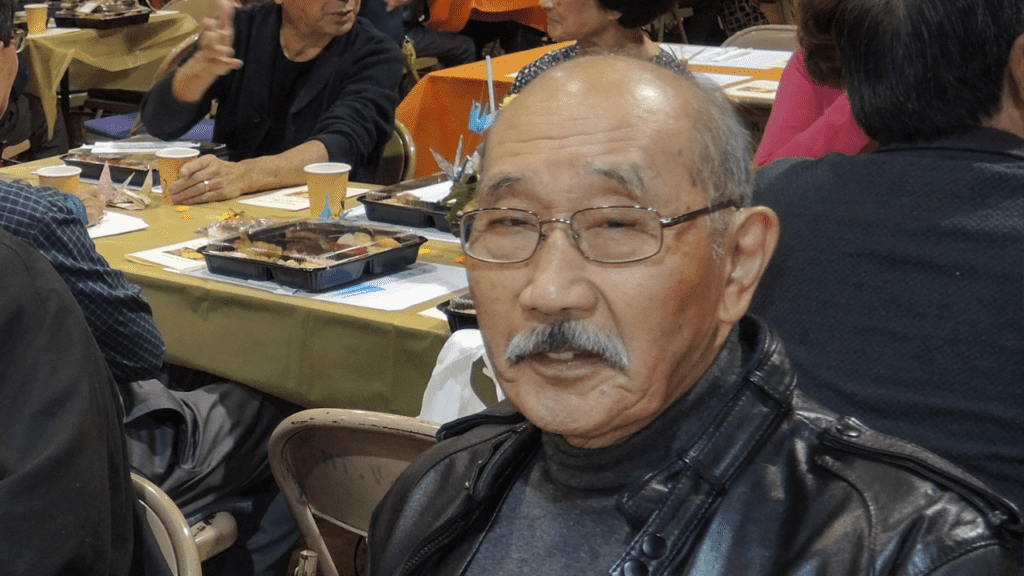 Ben was born in Wapato, Washington, to mother Kiyo Tsutsumiuchi and father Kumetarao Horita.  Wapato in the Yakima Valley was American Indian owned land.  Renting the land from them, Ben’s family farmed the land with other Japanese families.  Ben was the 6th of 7 children (3 girls & 4 boys), all delivered by a midwife (Mrs. Hayashi).

Farming this land was very hard work, so Ben, at a young age, learned many skills and lifelong experiences.

When the World War II broke out with Japan, all the Japanese families in the Wapato area were sent to Portland Stockyard Assembly Center.  After traveling all night on the train with only a suitcase per person, they stayed at this assembly center for almost 4 months.  In September 1942, the Horita family was interned at Heart Mountain, Wyoming, until July 1945.

After leaving Heart Mountain, the family moved to Midvale, Utah, for a short farming life. By September of 1946, the Horita family settled in San Jose.  Here they were able to farm in different cities of Santa Clara Valley.

Ben joined the Army in 1952 and was stationed in Germany with an Occupation assignment until his discharge in 1954.

Ben met his wife, Kay Kawamoto through a mutual friend and were married in June 1958.  They had three girls – Gayle, Lori and Carole.  Ben has two grandchildren, Katie and Patrick, Gayle’s children.

In 1960, Ben started his career at NASA.  This was where Ben assisted in testing small-scale model space capsules in a wind tunnel, taking many photos of these models to ensure the safety of the real space capsules.  After 15 years of this testing, Ben transferred his skill set to flying as a crew member in the NASA-714 aircraft, a modified Lockheed C-141A Starlifter jet transport aircraft.  Many of us from Mountain View remember this aircraft flying out of Moffett Field to take infrared astronomy photos of outer space.

This NASA position required being stationed in different parts of the world.  Ben recalled the time being located in Hawaii, where Kay was allowed to join him.  While he worked, Kay would enjoy sightseeing with the other ladies (spouses) of the flight crew.

During our interview, Ben shared with me his wind tunnel drawings and scale model space capsules while explaining his role in the testing.  He sounded very proud of his testing role in the NASA space program.

In the early 1970s, Ben started working part-time at a Gulf gas station, while still working at NASA.  The gas station was owned by the Ikeda family of Palo Alto.  Bill Kaku was the manager of this station, who hired Ben as a part time evening worker.  This was where I first met Ben.  Ben was my supervisor, and we closed the gas station together on the night shift.  Ben taught me many auto mechanic skills.  He taught me how to lift my GTO on the rack to change the oil and lubricate my car on a regular basis. Thank you, Ben!

How Did Ben Get Connected with MVBT?

We all know how the word gets out at the MVBT when there is a new family around at the Temple.  Before Ben knew it, Ben was washing rice for Mochitsuki when asked by Hiroji Kariya.

But it wasn’t long before Ben started to get assigned to the Bazaar booths.  His first booth was the Nickel Pitch and then moved to Animal Pitch.  In 1993, Ben & George Sato were co-chairs of the Obon Festival and Bazaar.

Soon after, Ben helped out at the Temple on Wednesdays under the direction of Alan Nara, the beginnings of the “Maintenance Crew.”  Some of the original crew members were Dan Iwata, Aki Nakano, Ed Chikasuye, Alan Nara and Ben.

Ben recalls that Dan started to cook lunch for the crew every Wednesday.  Soon after Miki Nishimoto and Ruth Kamei, who helped out in the Temple office on Thursdays, suggested that they switch to working on Thursdays, so the Maintenance switched its workday to Thursday.  Ben said that he thinks Miki & Ruth enjoyed socializing with everyone, but Ben thinks it was Dan cooking lunch for everyone that was the big attraction.

As more and more members retired from their jobs, the Maintenance Crew grew in number, even more ladies began helping in the office.  The word got out that Thursdays were a big social event with a great lunch.  As a result, the lunches were longer and more food had to be bought.  Ben recalls Hiroji Kariya donating money to buy all the food for lunch.  Wow!, what fun times this was for everyone as Temple upkeep was being completed.  Ben was and still is a wealth of knowledge when it comes to Temple maintenance.

Some of the bigger projects Ben remembers were the building of the roof on the reefers and the construction of the large shed next to the parsonage, which they nicknamed “Rev’s Dog House!”

In his younger years, Ben enjoyed fishing for trout at Davis Lake, as well as traveling north to the Klamath River to fish for salmon.  One other hobby of Ben’s was taking pictures. I must have seen 50 photo albums on his bookshelf.  Ben was able to create two beautiful bound manuals of the history of the Horita & Kawamoto Families.  He hopes that he can share these two documents with others that might be interested in the history of his and Kay’s families.  The old photos of his grandparents & parents as well as Kay’s side are a family treasure.

After the passing of Kay in 2012, Ben took his three daughters on a wonderful trip to Japan.

Now Ben relaxes at home and enjoys his talks with his daughters who check on him on a regular basis.  His Japanese friend who lives across the street helps Ben with the yard and checks on Ben daily.  He now has his own maintenance crew of two.   Good for you, Ben!

On behalf of the Mountain View Buddhist Temple, we thank you for the many years of dedication and hard work at the Temple.  We are all grateful and appreciative of your continued friendship and support.