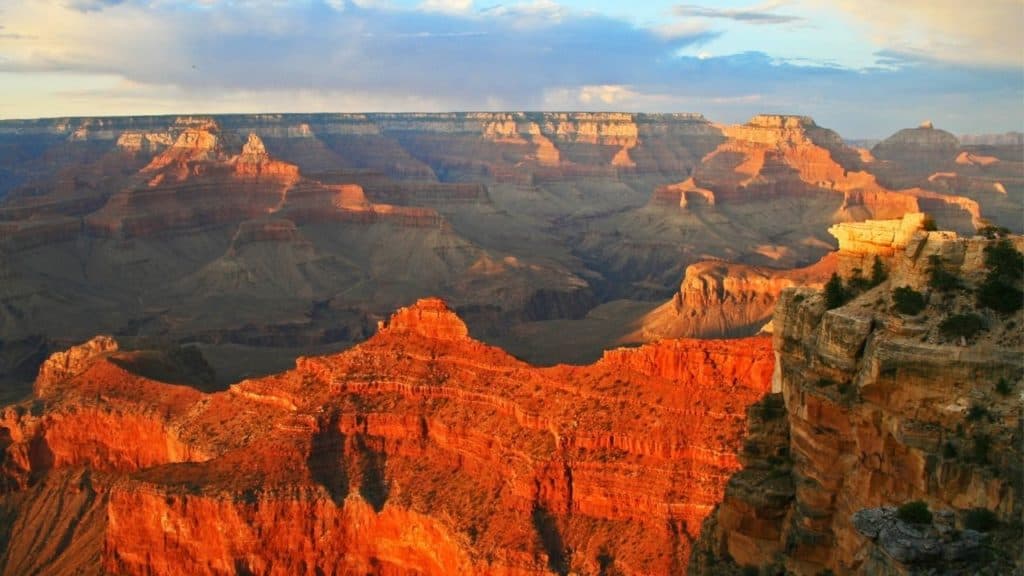 My family and I went to the Grand Canyon and Monument Valley during my summer break at the end of July. Although it was a long road trip of over 2,000 miles, we were able to heal our minds in the great nature created by Mother Earth as we thought of my own mother whom we lost last May.

The vastness of the Grand Canyon is magnificent and indescribably beautiful. We were moved by its long history as shown in its many layers of strata. We fully enjoyed the majesty of this natural treasure. It was as if we could feel the breath of Native Americans rising up from the red soil which covered the mysterious rocky mountains of Monument Valley.

The most memorable sight which will remain in my family’s heart is the Grand Canyon valley itself, which in the setting sun appeared dyed red. The sunset seen from Yavapai Point was so beautiful that we lost track of the time. The bright red sun lowering into the magnificent valley gently wrapped around my heart because it reminded me of the sunsets I watched with my mother when I was kid. So for me, it was a very meaningful trip because I was able to cherish certain memories of my late mother and at the same time be healed by the magnificent scenery woven by nature.

Since ancient times, it has been a custom for Buddhists to watch the sun setting in the west, and to aspire to be born in the Pure Land while thinking about our loved ones who have gone before us. It is because the Three Pure Land Sutras say that a Pure Land of Utmost Bliss built by Amida Buddha exists beyond a hundred thousand kotis of Buddha-lands west of the world we live in. Thus the sunset marks both the end of a day and the end of our lives, and we envision Amida Buddha and the Pure Land where we will return as Buddhas in the afterlife.

However, I wonder if the description of the Pure Land existing far off in the west as an actual place and Amida Buddha regarded as an actual being makes all of this sound more like a fairy tale to those of us living in today’s world.

Originally, the Pure Land was described as “Dharma Body as Suchness”—that is, as enlightenment itself. It is a world without color and form and refers to the working of wisdom and compassion. So certainly, the Pure Land is not a world we can actually see. But because we ordinary people live in a world of delusion, it’s impossible for us to even comprehend a world of enlightenment without color and form. But with words using concrete colors, forms and direction, Sakyamuni Buddha described the Pure Land in the Amida Sutra in such detail that we could easily recognize it. Using what he called “Dharma Body as compassionate means,” Sakyamuni Buddha assured those of us who cannot recognize it by ourselves that we can still envision the Pure Land in our hearts and wish for rebirth without suffering and pain in a true world of enlightenment. Even so, there are still people who don’t take this interpretation seriously and choose to deny the existence of the Western Pure Land. Nonetheless, we should try to accept that it is impossible for an ordinary person to experience the working of enlightenment without the Dharma Body as compassionate means.

Finger Pointing to the Moon

Nagarjuna, one of the Seven Pure Land Masters, described a way of looking at things with just one finger. He described a person using his forefinger to point at the moon and the people who followed with their eyes the direction he was pointing in to see the beautiful moon for themselves. But even when someone uses his forefinger to point at the moon, a number of us will unfortunately focus only on his pointing finger without looking in the direction he is pointing. Thus we will not get to see the moon’s beauty. That means the unfortunate among us will not experience the beauty of the moon because instead we attach too much importance to the color and shape of the pointing person’s forefinger.

Twelve years ago, when my daughter was a year old, I took my family to Disneyland where I happened to spot Mickey Mouse walking across the street from us. I immediately pointed at Mickey Mouse and said to my daughter, “Hey! Look over there! Mickey is walking right over there!” But my daughter only looked at my pointing finger. No matter how much I repeated, “There’s Mickey, right where my finger is pointing!” she didn’t turn around, but just kept looking at my finger. So she missed seeing Mickey Mouse.

In the same way, if people cannot open their eyes to the real intention of Sakyamuni Buddha because the description sounds like a fairy tale, they are like my daughter who only looked at my finger and never saw Mickey Mouse.

The Pure Land, which has no color or form and is vast and without boundaries, is the world which can only be seen through the eyes of the Buddha’s wisdom. It is a world beyond our ordinary perception and imagination. But the Western Pure Land is revealed through Buddha’s calculation or compassion so that even people like ourselves can touch the world of enlightenment where we aspire to be born as Buddhas.

In the long history of our tradition, Jodo Shinshu has valued equally both “Dharma Body of Suchness” – the world of enlightenment which has no colors and forms and is vast and without boundaries; and “Dharma Body as compassionate means” – the world of enlightenment which is expressed using forms and direction. It is because they are an inseparable relationship like the two sides of a same coin. Rather, Shinran rejoiced with Amida Buddha and the Pure Land which have colors and forms, namely, “Dharma Body of compassionate means” as expressed by Buddha’s calculation.

By showing us that the Pure Land which exists westward beyond a hundred thousand kotis of Buddha-lands, the Buddha’s guidance enables us ordinary people to wish for birth in the real Pure Land. When we imagine the Pure Land in the west, we are embraced just as we are by Amida Buddha’s wisdom and compassion. It is all due to Amida Buddha’s Primal Vow that will never abandon us ordinary beings.

Carrying within me the Western Pure Land as my spiritual support, I will continue to lead my life in joy and strength with the Nembutsu of gratitude. Then when my time to leave this world comes, I will immediately be born in the same Pure Land where Shinran and my late mother wait for me.