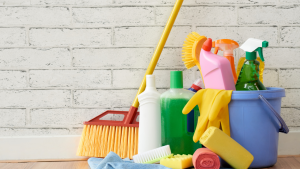 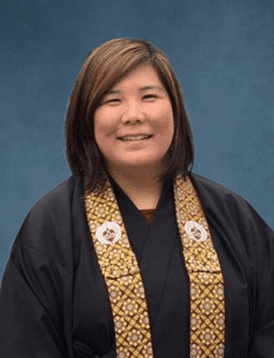 This is the last of the three articles by three MVBT Girl Scouts who are working for their Padma Award.  Each scout is writing about a woman who is a Buddhist Reverend within the Buddhist Churches of America.

Reverend Candice Shibata is currently the resident minister for Buddhist Church of Stockton and also serves as the supervising minister of the Lodi and Walnut Grove Temples.  She is currently serving in the Northern California District along with Rev. Matt

Hamasaki of the Buddhist Church of Sacramento.

Reverend Shibata was born in San Jose, but her family moved to Stockton shortly after, where she went to school through high school.  During her school years, she attended Dharma School at the Buddhist Church of Stockton, was an active YBA member, was part of her Temple basketball team, and was a part of her junior high school Sangha Club.

In addition to these activities, her family of ministers exposed her to Buddhism.

After her general education in Stockton, she did her undergraduate studies at California State University, Sacramento where she majored in psychology and minored in sociology.  After she finished her undergraduate studies at Sacramento State, she was a case manager for infants with developmental delays for seven years.  In 2009, she received her master’s degree from the University of San Francisco where she studied counseling psychology, and eventually interned as a marriage and family therapist at two elementary schools in Stockton.

When she was 25 years old, her mother passed away.  This was a big turning point in her life because her mother’s death had a major impact on her, “causing her life to fall apart”.  This is when she started to acknowledge dying and impermanence, but she was still confused because this was the biggest loss in her life.  It was not until she started to deal with her grief that she realized Buddhism was always there for her in some capacity.

When she was a child, Buddhism was evident in her family’s history of ministers, and while growing up, she was always active at her Temple.  In 2010, she made the decision to leave behind her previous studies to learn about Buddhism and become a ministerial aspirant.  In her mid-thirties, she went to the Institute of Buddhist Studies in Berkeley to learn more about Buddhism and graduated in 2015 with a master’s in Buddhist Studies.  While she was studying at IBS, she served as a minister’s assistant at the Buddhist Church of Stockton.

In 2012, she received her first level of ordination called Tokudo in Kyoto, Japan, which is a Buddhist ceremony to enter priesthood.  Additionally, she returned to Kyoto in 2015 and obtained her second level of ministerial certification called Kyoshi at Nishi Hongwanji.  After becoming a minister, she was assigned to the Berkeley Buddhist Temple and served there for about two years.  In January of 2018, she was transferred to the Buddhist Church of Florin, and on July 1, 2020, she returned to serve at her home temple in Stockton.

After the interview with Reverend

Shibata, it reminded me of how I also lost someone close to me, however, it was my grandmother.  She passed during my sixth-grade year, and this was the first time I had lost someone close to me.  This had a big impact on me, and I was not sure how to process my emotions, especially because she passed away during the school year and I had to keep up with my school work.  My family started attending Sunday Services more frequently, and hearing the Dharma Talks helped me deal with my grief.  Dharma Talks about the Pure Land and impermanence were the most helpful because I was reminded that nothing in life is forever.

With Kindness & Gratitude Beyond Words