Walk the White Path of Shinjin 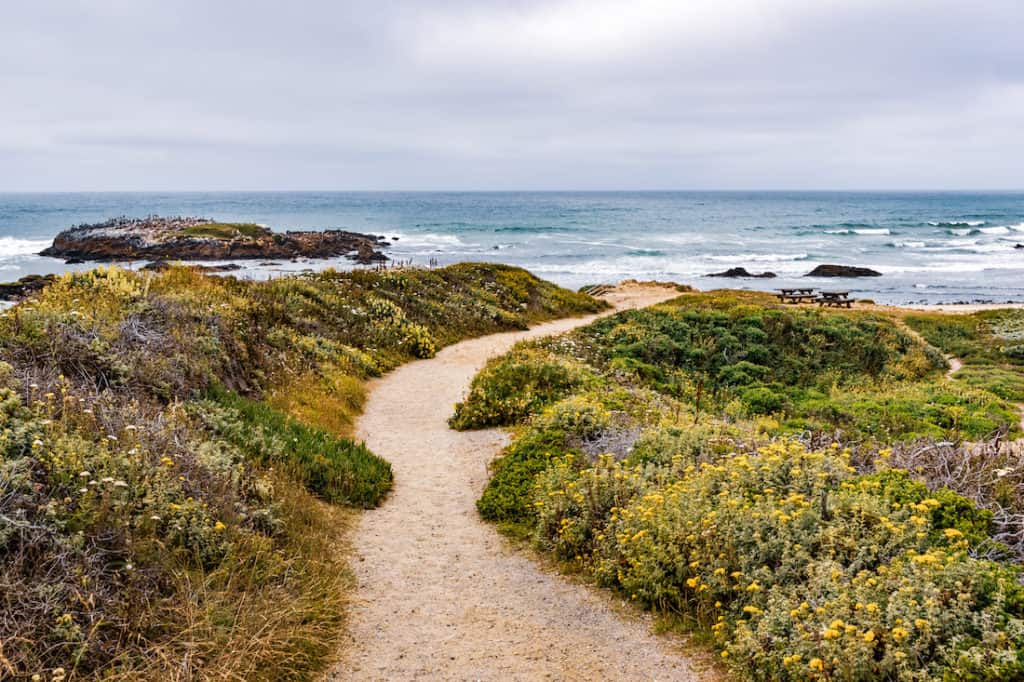 On Sunday, March 14, the Mountain View Buddhist Temple observed the Spring Ohigan Service with our guest speaker, Rev. Ron Miyamura. It was a great Dharma opportunity to learn about the journey of life we make in the direction of the Pure Land or Higan. Following the service, Rev. Miyamura introduced the parable of “Two Rivers and a White Path,” which very simply describes the teaching of Jodo Shinshu. And with his seminar, we could also deeply appreciate the mind of Amida Buddha’s Primal Vow.

“Two Rivers and a White Path” is a famous story from the commentaries on the Contemplation Sutra written by Shantao (613–681), one of the seven Pure Land masters in the Shin Buddhist tradition. I would like to share this story with you again this month.

There is a man traveling west on an endless road. Suddenly, bandits and vicious animals appear behind him out of nowhere to attack him. When he realizes they are rushing toward him, his first thought is, “I’m going to be killed!” and he starts running desperately westward though two huge rivers block his path. One of them is a river of water that extends north and the other one is a river of fire that extends south. But at the point where they meet, there is a white path, just five or six inches wide. On one side, great waves of water surge over this narrow path. From the other, huge flames of fire scorch it. These waves and flames rise and consume the path.

In the face of such an unexpected situation, the traveler realizes he has lost his escape route and is frozen with the fear of dying. Suddenly he hears a voice from the eastern bank urging him, “You must take this path immediately with firm resolve. There is no danger of death. But if you stay there, you will die.” Then he hears another voice from the western bank calling to him, “Come at once and rely on me. There is no need to worry because I’ve got your back. Don’t fear falling into the rivers of water and fire.”

On hearing the voices urging him first from the east bank and then from the west, the man suddenly relaxed and followed their voices. Without hesitation, he placed one foot firmly onto the white path. It was a path that had never been disturbed by either the great waves of the water or the huge flames of fire. The traveler walked across the white path and reached the western shore where there is neither fear nor danger, but only peace and tranquility. There he was lovingly welcomed by his good friends who awaited him. This is the gist of the parable of “Two Rivers and a White Path.”

The story describes Shinjin or the entrusting mind using a unique metaphor in Pure Land Buddhism. The eastern bank represents the world of delusion that quakes with fear and worry—namely, the world in which we are now living. The western bank represents the world of enlightenment of immeasurable life and inconceivable light—that is, Amida Buddha’s Pure Land. The lone traveler represents each one of us. The bandits and vicious animals symbolize our ignorant minds that cannot see the truth just as it is, but distorts the way we see the world. The river of water symbolizes the greedy mind that causes lust for and attachment to our favorite things. The river of fire represents the angry mind which makes us express bottomless hatred. The white path is the Nembutsu path. Although this path doesn’t remove the water nor the fire, it is still the dependable path that no one can interfere with.

It is important to note here is that the summons of the Primal Vow is not the calling voice beckoning from the Pure Land. It represents the working of the Nembutsu, “Namo Amida Butsu,” which is the white path before us which leads to the world of the truth.

Do you remember the tragedy of Air Florida Flight 90 that crashed into the Potomac River near Washington, D.C., in January of 1982? Most of the passengers were killed instantly. Only a few people were thrown into the frozen river, desperate to be rescued.

Rescuers on a helicopter threw a lifebuoy down to a woman who was clinging weakly to the frozen ice. Although she wanted desperately to grab the lifebuoy, she no longer had the strength to hold onto it, so she let go and began sinking. At that very moment, a man on the riverbank dove into the river and swam quickly to her, grabbing her tightly and swimming back to the shore. Although the plane crash was a terrible tragedy, this man’s bravery became known throughout the world and he was praised for his selfless act. At the time, I was only 10 years old, but, when I saw this scene on TV, I was deeply impressed by the man’s disregard of his own safety. Decades later, I still clearly remember his brave act.

To dive into the river from the shore, swim in freezing water to a woman who no longer had the strength to cling to a lifebuoy, then swim back to the shore while holding her above water – I am sure that this description expresses the very concept of rescue.

But this also describes precisely the working of Amida Buddha. It is not simply lowering down a lifebuoy. It is the working of Amida Buddha that immediately embraces and saves all people who are so helpless that they lack even the power to grasp a float. In this way, Amida Buddha comes to us foolish beings drowning in the ocean of blind passions and holds us tightly in his arms to lead us to the world of enlightenment, the eternal Pure Land represented by the white path that is the Primal Vow of the Nembutsu.

Even if plagued every day by the water of greed and the fire of anger, it is so important to entrust ourselves completely to the guidance of Shakyamuni Buddha and Amida Buddha and just step onto the white path without fear and doubt. This is called the white path of Shinjin.
The parable of “Two Rivers and the White Path” shows the steadfast way that leads to the world of the truth, so that with a profound feeling of security and strength in the Nembutsu, those of us who are being consumed by the flames of blind passions in this world of delusion can overcome any hardship and suffering.

“Take the path without hesitation!” “Come forward with confidence!” Now that we hear the calling voices of Shakyamuni Buddha and Amida Buddha through the Ohigan Service, let us walk the white path of Shinjin, the Nembutsu path, resolutely together without being afraid!