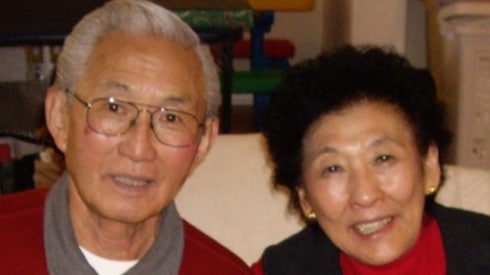 Shin Sawamura was born in Torrance, California, to Kyoshi and Itoju Sawamura.  He was the fifth and youngest child born in the family, having two older brothers, George and Tad, and two older sisters Miyo and Kayo.  Kayo is the only sibling still living and resides in Kochi, Japan.  Kochi Prefecture, on the island of Shikoku, is where the Sawamura family is originally from.  During this time, the Sawamura family was farming vegetables in the Torrance area of southern California.

Hideko (Dolly) Sawamura was born in Salinas, California in January 1934 to James and Masako Inokuchi.  Dolly was the fifth child born in the family, having three older sisters:  Matsuko, Michiko and Nancy; one older brother Minoru; and younger siblings sister Edith and brother Donald. The Inokuchi family is originally from Hiroshima, Japan, with a small branch of the family landing in Honolulu, Hawaii.  Story goes that one of Dolly’s uncles was a chef to the last queen of Hawaii.

Shin’s father, Kiyoshi, was one of the founders of the local Kochi Kenjin Kai.  Kenjin Kai’s are clubs formed to bring together families who came from the same prefecture in Japan.  Each year, the club would hold a picnic during the summer and also host a New Year’s dinner and memorial service.  The club officially disbanded several years ago, but families still get together for a memorial service and lunch at the San Mateo Buddhist Temple.

On December 8, 1941, the United States of America declared war on Japan in response to Japan’s attack on Pearl Harbor.  Shin was 7 years old when his father sent him and his older sister back to Japan.  Tad had returned to Japan a year earlier and his other sister Kayo was also already back in Japan.  Now, all the children, except for oldest son George, were living in Japan because Shin’s father knew things were going to get bad for Japanese families here in the states.  Little did he know that things would only be worse for Shin in Japan. During the war, Shin lived with his grandmother and helped grow sugar cane in Kochi.  During this time, all the rice was being sent to feed the Japanese army, so there was not a lot to eat.  Shin remembers eating one potato a day.  That potato would be smashed in with just a little rice to make the rice last longer.  He ate so much potato that his skin began to turn yellow.  He also remembers the US bombers flying overhead and so close that he could see the pilots in the cabin.

Life was not much better here in the US for the Inokuchi family for in the spring of 1942, they were forced to leave their home in Salinas only being allowed to take one suitcase.  Dolly was 8 years old when her family was moved to the horse stables at the Salinas Race Track and Fair Grounds at the north end of Salinas.  They were forced to live in the stables for almost three months while the various concentration camps were being constructed throughout the US.  In the summer of 1942, the Inokuchis boarded a train for Poston, Arizona, where they were incarcerated in Poston Camp 3.  Dolly doesn’t remember a whole lot about the days in camp, but often times tells stories about having fun swimming in a big hole, her grandpa making sake, and having a short-wave radio.

After the war, Shin and the Sawamura family settled in Redwood City where they worked for Mr. Kitagawa at what was called Horgan Ranch.  During this time, Shin attended junior high and Sequoia High School.  He also remembers going to Japanese school nearby in a building on the ranch.  The family was able to save enough money to eventually purchase their own property at 2065 W. El Camino Real in Mountain View, the current site of KinderCare.  The family decided to grow carnations and constructed greenhouses, a packing shed and two small homes on the property.

The Inokuchi family settled in Morgan Hill where they grew strawberries at the base of Anderson Dam.  During this time, Dolly attended junior high and Live Oak High School in Morgan Hill.  The Inokuchi family later purchased property at the corner of Snell Road and Monterey Highway where they owned a cut flower nursery.  Dolly attended James Lick High School in San Jose, where she graduated in 1952.  Dolly has always been very close with her younger sister Edith Matsumoto (Bob Matsumoto’s mom) and the two families spent a lot of time together while the kids were growing up.

On August 20, 1953, Shin was drafted into the US Army.  He was trained as a Military Intelligence Specialist and was first stationed at Fort Ord, California, before being deployed to South Korea.  In 1954, Shin’s mother passed away suddenly and he was called home for her funeral.  He remembers the US Army treating him very well during this time and he had a private plane ride back from Korea to attend his mother’s funeral.  Since he was due to be discharged in less than a year, Shin served the rest of his time in the US Army at Fort Bragg, North Carolina.  Shin is very proud of his service in the US Army and most proud of his commendations as a marksman and special driver’s license authorizing him to drive a jeep, 4×4 truck and 6×6 two-and-a-half-ton cargo truck.  He was honorably discharged in the summer of 1955.  Shin enjoyed his time in the Army and really wanted to reenlist, but he had to return to California to help with the family business.

Sometime in 1957, Shin was encouraged to lead the Mountain View Buddhist Church YBA.  Back then, the YBA was an older group, not a high school age group like it is today and the younger high school age group was called the Junior YBA.  This encouragement came from the late Mr. Chiz Sakae, who was the current President of the YBA.  Mr. Sakae basically told Shin “it’s your age group’s turn to take over the responsibilities from us” (the current group that included Mr. Sakae and Shin’s older brother Tad).  Somewhat hesitantly, Shin felt obligated to take over as Mr. Sakae was someone Shin highly respected.  Shin took over as the YBA president in 1957.  He remembers hanging out with Ray Murakami, Shiro Morita, Bob Suzuki and John Chikasuye.

Shin served on the MVBT Board as a member of Zone 3 and was a part of the late Mr. Alan Nara’s “early” crew at Chicken Teriyaki for many years.  During the Obon Festival & Bazaar, he helped with BINGO and later helped co-chair the famous Unagi Donburi booth with the late Mr. Muneo Masaki.  Shin considered Muneo a dear friend and misses him greatly.

Shin and Dolly enjoyed attending the MVBT Senior Group sessions on Thursdays and particularly enjoyed the many trips to Reno with their friends in the Senior Group.

Although Shin didn’t consider himself a leader at MVBT, he highly encouraged his children to get involved with the Temple.  Sons, Doug and James, attended many years of Sunday School (now called Dharma School) and were active members of the Mountain View Buddhist Temple YBA.

Both Shin’s family and his older brother Tad’s family worked together growing carnations for many years.  Life on the nursery was fun for the kids, but it was hard work for the adults.  They worked 6-days a week, sunrise to sunset, and never really took a vacation.  The Sawamura Brothers’ carnations were well known and high quality.  Most of their carnations were shipped to the East Coast where they were sold in the local florists in New York City.

Going fishing at the beach in Santa Cruz was a big treat during the summer.  Another was going to the Royal Buffet on El Camino Real.  Doug remembers going there with his uncle’s family and taking their nursery workers sometimes. He also remembers having contests for the most servings eaten.

For birthday parties and major holidays like the 4th of July, the family’s packing shed was turned into a large dining hall.  Family and friends would gather regularly at the nursery and it was a lot of fun for everyone.  Shin designed pieces of lumber that would bolt onto the packing tables and this turned the packing tables into picnic benches. There were no fancy Weber barbeque grills back then and the steaks and hot dogs were cooked on a homemade charcoal pit, made simply with a few bricks and leftover wire fencing material.

For a while, the Sawamura brothers ran nurseries at two sites.  One in Mountain View (behind the old Camino Bowl) and another in San Jose across the street from what’s now Yerba Buena High School.  Eventually, they sold the property in Mountain View and focused their efforts on the larger nursery in San Jose.  During this time, Shin and Dolly purchased their current home on Sylvan Avenue in Mountain View.

After retiring from the nursery business, both Shin and Dolly got part-time jobs just to keep busy. Shin worked as a delivery driver for Vision Color Labs.  He loved his job because it allowed him to meet many different people at the various high-tech companies in the valley.

Dolly worked for 10 years in the deli at the local Lucky Supermarket.  The late Mrs. Amy Imai encouraged and helped Dolly get a job at Lucky.  Dolly had many regular customers who would wait in line at the deli until she was free because she had the reputation of making the best (and biggest) sandwiches.

Shin and Dolly were married at the San Jose Buddhist Church on October 1958.  Doug was born followed by James.  They are very proud of their two sons, although Dolly still says “she wished she had a girl”.

Shin and Dolly enjoyed their trip to Japan in 2006 because it was Dolly’s first trip to Japan and they got to travel with Doug, Phyllis, Megan, Kelsey and Haley.  During this trip they visited Tokyo and Kochi.  While in Kochi, it was very important to visit the Sawamura family cemetery and spend time with Shin’s older sister Kayo.  While in Tokyo, Dolly got to see one of her cousins (Aiko) who she hadn’t seen in many, many years.

The Sawamura family crest, or Mon, is made of three orange blossoms (Tachibana).  The term “Kamon” or “Mon” refers to a crest used in Japan to indicate one’s origins; that is, one’s family lineage, bloodline, ancestry and status from ancient times.

Shin and Dolly have many fond memories of their activities with the Mountain View Buddhist Temple and hope that the Temple’s rich traditions and events will be preserved by the Sangha for years and years.  Thank you for allowing Shin and Dolly to share their family’s story with you.

With Kindness and Gratitude beyond words,