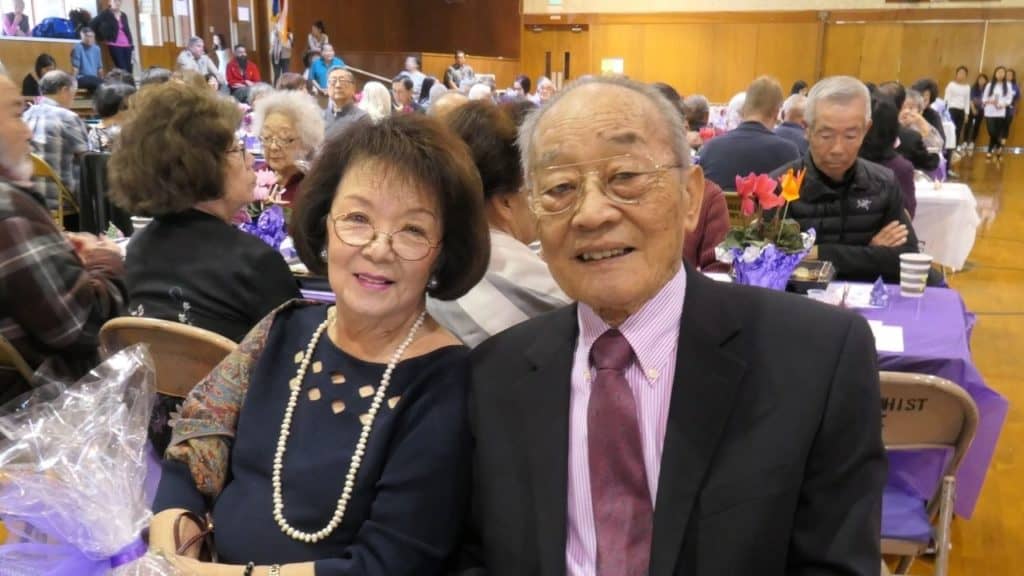 Ray and Reiko Murakami have been active members of the Mountain View Buddhist Temple for decades.  Here’s their story.

Ray was born with the birth name Akira Murakami in Guadalupe, CA, the fourth of five children.  The Murakami family was interned in Gila River, AZ, during World War II.  After WWII, they settled in Elk Grove, CA, and farmed the land.  When Akira, enrolled in grammar school, many of Japanese kids didn’t have English names at the time, so his sister named him Ray.  He attended Rhoads School (founded in 1872), a one-room schoolhouse from first to eighth grade.  He remembers carving his initials on the backside of the schoolhouse.  The school building has been preserved and moved to a park in Elk Grove and is now a California Historical site.  In 1948, the family moved to Mountain View to start a strawberry farm.  He graduated from the old Mountain View High School, off of Castro Street, and, in 1964, he graduated from San Jose State with a BA in Fine Arts.

Reiko Terao was born in Seattle, WA.  The Teraos were interned in Minedoka, ID.  Upon leaving camp, Reiko’s family went to Spokane, WA, and her father, Reverend Eiyu Terao, a BCA minister, established the Spokane Buddhist Church.  She is the oldest of four children.  Her sister, Karen is married to Reverend Ken Akahoshi with the San Diego Buddhist Temple.  Reiko attended the University of Washington and moved to Alameda in 1962.

FAMOUS VISITORS WHILE IN SPOKANE

In 1951, Lord Abbot and Lady Ohtani came to tour the BCA churches.  Bishop Shigefuji asked Reiko’s mother to travel as Lady Ohtani’s Lady-in-Waiting.  The entourage visited all the churches in the Northwest – Washington, Oregon and Idaho.  At that time, Reiko’s mother was pregnant with Reiko’s youngest sister, and, when she was born, she named her “Yoshiko” in honor of Lady Ohtani.  It was a surprise to many people that a small community such as Spokane would have many Japanese celebrities come and entertain.  The famous singer, Misora Hibari, came when she was about 13 years old.  Actress/singer Rikoran (Shirley Yamaguchi) famous for recording the songs, “Shina No Yoru” and “Eiraishan” stayed in their home.  Shirley just adored Reiko’s younger brother, Dennis.

When Reiko was enrolled in grammar school, her mother listed her name as Joyce, which was her mother’s name.  Reiko didn’t care for the name because one of the church members always called her “Joyce Jr.”.  Upon graduation from high school, Reiko had to fill out a form to write her name as shown on her birth certificate for her diploma.  To her surprise, her mother said that her name was just Reiko Terao – not Joyce.  Reiko was called down to the principal’s office and scolded: “Can’t you follow directions?”  The family remained in Spokane until they moved to Alameda where her father served at the Alameda Buddhist Temple from 1960 until his retirement in 1978.

Ray was discharged from the Army in 1962 after serving in the Panama Canal Zone.  He returned in time to be a groomsman for his classmate, Jimmy Furuichi’s (Ben’s younger brother) wedding.  Jimmy married Satoko Sugiyama, Reiko’s friend from Alameda.  Outside the Mountain View Buddhist Temple, prior to the wedding, Reiko was struggling to pin the corsage on her jacket.  Reiko recalls that a “very tanned-skinned man in a white dinner jacket, with big black horned rim glasses” approached her and asked if she needed help.  She didn’t know if he was Japanese or not.  That was their first meeting.

Reiko and Ray were married by Reverend Sensho Sasaki in 1964.  Prior to their wedding, they had to go through the old ritual of having a “Baishakunin” (“go-between”) from both families.  When Ray’s parents visited with their Baishakunin, Mr. and Mrs. Tomizo Furuichi, Reiko had to serve the tea and then leave the room.  From the kitchen, she could listen in on the conversation.  It was exciting as Reiko’s cousin went through the ritual the prior year.  The groom’s parents would come bearing a tray with Japanese envelopes tied with “Mizuhiki” ceremonial paper cord in “Kyukyodo” inextricable knots.  A dowry in reverse. Ray and Reiko were married in the Mountain View Buddhist Temple, which is now the YBA Hall.  They received an Obutsudan and Onenjus from the Temple as gifts.

After Ray graduated from San Jose State, his first job was as a commercial artist with an ad agency in Reno, NV.  While in Reno, they welcomed the birth of their daughter, Kari Mieko, in 1965.  In 1967, the family moved back to the Bay Area.

After Kari started school, Reiko worked part-time for State Farm Insurance and Min Uyehara was her last boss.  Reiko then went into business designing and sewing evening clothes.  She did a number of fashion shows for Yu-Ai Kai, CHIAM and Pola, and retired at age 50.  One day Ray told her that San Jose Airport were looking for Japanese speakers.  She didn’t want to go, but he said, “just go see what it’s about.”  Reiko came home with a job with American Airlines for the new Tokyo flight with American’s Special Services.  She went on to a management position dealing with the daily Tokyo and domestic flights with First Class and VIP passengers.  She retired in 2005.

Ray had a long career as a graphic and commercial artist having worked for advertising and electronic companies.  In 1982, he started his own freelance business.  He shared his talents with MVBT with several projects.  In 1990, he helped George Abey produce and design the MVBT 25th Anniversary album, Echo I.  He was very impressed at George’s talents, as a writer, artist and his woodcuts for the album.  In 2009, Amy Imai asked Ray to be co-editor and design and produce the MVBT 50th Anniversary album, Echo II, for publication in 2012.  He says that “without the support of co-editor Richard Fujikawa, the album staff, and contributions from all the Temple organization, this project could not have been done.”  Ray’s artwork is highlighted on the cover of the first Mountain View Buddhist Temple Cookbook.  Reiko’s illustrations are also in the cookbook.  After a few revisions to the cover art, the Temple is now using it as the Temple logo.  Ray was also the layout consultant for the Senior Activities Cookbook with Reiko as the illustrator.

With the encouragement from Yas Shimoguchi, Ray started the YABA-ABA in 1972.  He served as its first President and Yas was Vice President.  Prior to committing to join the ABA national organization, Ray and Reiko went on a scouting trip to attend an ABA conference in Fresno.  Most of the attendees were their parents’ age.  After reporting back to the group, the name was changed to “Young Adult Buddhist Association-Adult Buddhist Association” (YABA-ABA).  One of the big events that year was the Hawaiian luau.  The YABA crew had to dig a large pit behind the Sangha Hall patio to cook the pig underground with lava rocks.  Approximately 130 guests enjoyed the Hawaiian feast, with lomilomi salmon and all the trimmings.  Intended to be a one-time event, the Luau became an annual MVBT fundraiser for many years.  In 1972 the YABA-ABA held the first Reverend Sensho Sasaki Memorial Golf Tournament, organized by Ted Abe, who also ended up winning the tournament.

Reiko taught third grade Dharma School at MVBT for one year.  Her biggest challenge was “trying to keep the kids engaged.  Third grade was difficult, and the class included three mouthy boys!”  They insisted on calling her “Teach.”  She knew teaching was not her thing.

Reiko prepared hot lunches for the Wednesday Maintenance Group once a month.  She remembers them as very special people: soft spoken and very kind who always laughed about themselves.  As time went on, the morning coffee breaks started earlier and lasted longer.  Donuts were supplied by Arlene Tahara, the Temple secretary. Reiko still misses the men of the Wednesday Group.

From 2007 to 2010, Reiko chaired the MVBT White Elephant fundraiser.  For weeks before the sale, Jeanne Ohara and Haruye Hoshi worked with her every day in the YBA Hall, cleaning and pricing donated items from our Temple members.

Reiko became the BWA President in 2011 and continues to this day.  It was a big learning curve for her.  Reverend Mukojima would always mentions “that the BWA was the backbone of the Temple.”  Reiko noticed that MVBT didn’t have a statue of Shinran Shonin on the grounds and thought that this would be a great project for the BWA.  Reiko spent long hours corresponding with the people in Japan to manufacture and purchase the statue.  Kiki Yonemoto installed the statue with the help of Jeff Sato, Bob Imai and Harry Ohara.  It was a joyous day on May 11, 2014, when the statue was dedicated in memory of past BWA members.  Reiko views the BWA as an energizing and profoundly dedicated group.

Long-time friend, Miyo Takegami says that “Reiko is a dedicated, competent leader who has led the BWA thru tumultuous years of declining membership due to the advancing age of our members.  She has successfully encouraged many younger members to join and they have infused our group with new ideas, advice, support and diversity.”

Mrs. Kinuko Sasaki (Reverend Sensho’s wife) talked to Reiko “like a grandmother and gave her many hints for everyday little things.”  The Sasaki and Terao families have known each other since Reverend Sensho Sasaki was the minister at Stockton.  Reiko’s mother even babysat Reverend LaVerne when he was a child.  Reiko says that “as a PK (preacher’s kid),” the things that impressed me as a child had a big influence as an adult.”

The Murakamis appreciate their time at the Mountain View Buddhist Temple.  They hope that MVBT continues to thrive, and founding member Hiroji Kariya said it best at the 50th Anniversary, “keep doing what we have been, only more so.”  Miyo learned “that from observing Reiko’s enthusiastic devotion to our Temple and organization – diligence will reap many rewards in life!”

The Sangha thanks the Murakamis for their dedication and support of the Mountain View Buddhist Temple and hope they will continue to reap many rewards in life.