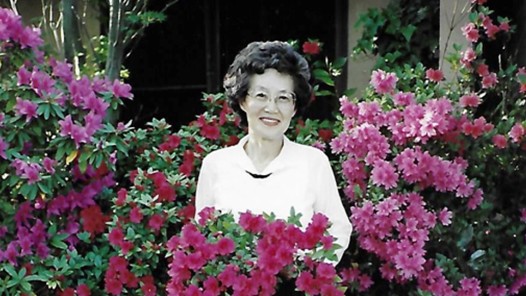 Toshiko Masaki has led a full and interesting life that is highlighted by her experiences with the Mountain View Buddhist Temple and its Sangha.

Toshiko was born in Loomis, California.  She was the sixth child in a family of 10 children and the only girl.  Her parents were fruit farmers and she remembers their “life was simple and good.”

At the age of 17, their family was evacuated.  She remembers that “it was so sad leaving the house.”  They were interned in Heart Mountain where Toshiko helped to teach 1st grade students and Sunday School.  She then worked at a dental office assisting a dentist.

After the World War II ended, the family returned to Loomis.  Toshiko attended a tailoring school in San Francisco and got a job sewing clothes for fashion stores.  With her sewing skills, she also repaired parachutes at McClellan Air Force Base in Sacramento.

Toshiko was introduced to Muneo Masaki through mutual family friends who served as “baishakunins.”  The baishakunins must have known that Toshiko and Muneo would be a good match because, after only four dates, he proposed!  They were married in 1955 and remained a blissful couple for 61 years until Muneo’s death in 2016.  Their daughter Gayle was born in 1961.

When Toshiko and Muneo joined the Mountain View Buddhist Temple, Yas Shimoguchi introduced them to many people who became good friends including Misao Tanouye, who has remained a long-time friend.  Toshiko Kawamoto welcomed Toshiko with open arms and taught her how to be comfortable with everyone.

She also enjoyed attending the Thursday Senior Group and participating in arts and crafts, line dancing, and exercise.  The Sangha Day Picnics were an annual highlight as she and Muneo liked seeing families and enjoyed the outdoors.

Muneo spent time with the Wednesday Group working on the Temple grounds and was part of the ECHO staff collating the printed copies.

Toshiko always looked forward to the annual Obon Festival & Bazaar and working in the Unagi Booth with Don Fukuma, Shin and Dolly Sawamura, Iwao and Kyoko Nakao, and Yutaka and Harriet Hamamoto.  She praises Don Fukuma for “making the best unagi sauce!”

Sterling Makishima remembers the Masakis as being “close friends with Chuck and the late Sumi Uyeda – both also from the Loomis/Penryn area – and painting craft friend, Barbara Sugimoto (his aunt).  They were neighbors of the Ikeuyes in Sunnyvale and Toshiko still talks to their daughter Noreen regularly.”  He praises Toshiko and Muneo as “true Buddhists who exemplify interconnectedness and interdependence.  I know I’ll try my best to follow their example.”

Toshiko currently lives at Atria Evergreen Valley, a Senior Assisted Living facility, where she looks forward to exercise classes twice a day, art class, and visiting with friends.  Her happiest times are spent with her daughter Gayle and husband Gil, and sharing her artwork with Temple friends and family.

One of the most important lessons that Toshiko learned was “to follow the Golden Chain in everyday life.”  She says, “I feel so fortunate to be a member of MVBT and I treasure my wonderful, life-long friends that I’ve made over the years.”

And the MVBT Sangha treasures Toshiko and Muneo’s commitment and support to the Temple and look forward to the time where we can visit with Toshiko in-person.