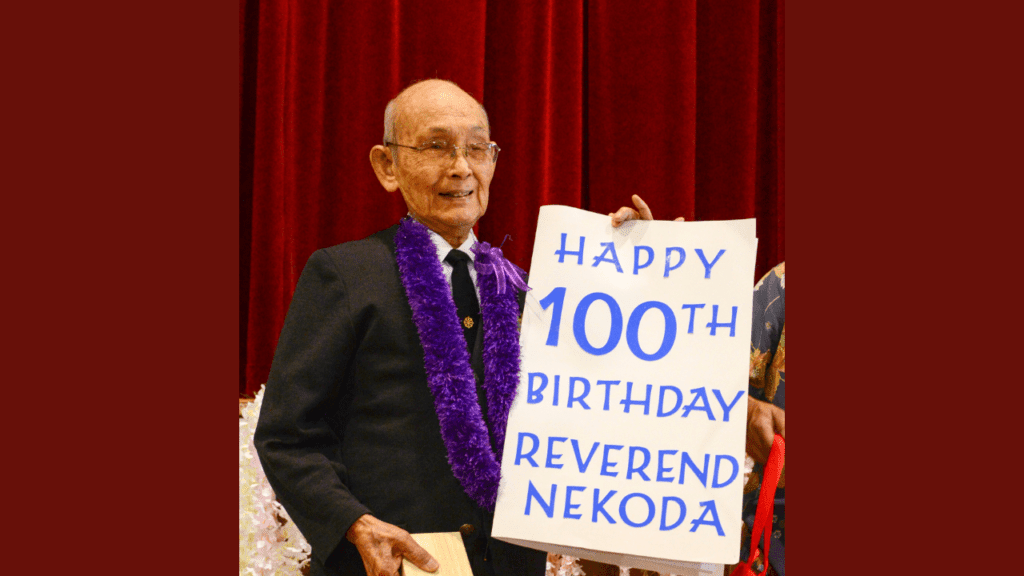 In 2020, Reverend Ensei Hitoshi Nekoda will be 101 years old.  He is one of MVBT’s oldest Sangha members.  Prior to the Temple closure due to COVID-19, Sensei took part in major Mountain View Buddhist Temple services and he sat in the Onaijin with Reverend Mukojima and the O-asaji group on many Sundays.  He also participated in Thursday Senior Activities and has led workshops on origami and acupressure.  His intricately folded origami zodiac animals are works of art.

Sensei was born in British Columbia, Canada, and grew up in Vancouver.  He was one of five children born to immigrants from Hiroshima, Japan.  He attended both Vancouver Technical School and Japanese school through high school.  After graduation, he planned to attend college.  This was during the Great Depression, so he planned to work two years first, then attend college for four years, (instead of the usual course of ½ year attend college, ½ year work).  However, due to an illness while employed at a lumber company, he had to alter his plans.  He then took a job as a male nurse, then worked at a drug store and had plans to continue studies in medicine.

Kaslo and Slocan were “ghost town” Canadian internment camps along and between Kootenay Lake and the Selkirk mountains, near the Rocky Mountain range in British Columbia, Canada.  At Kaslo he worked as a carpenter, sheet metal worker, electrician, correspondence course aide and unpaid lifeguard.  At Bay Farm he worked as an instructor/school teacher of manual training.  During the internment years, he was trained as a school teacher, taught 8th Grade while holding the position of Vice Principal, and then was Principal of the last graduating class.  After the war, the family moved to Toronto in eastern Canada.

In 1950, he went to Japan and became an ordained Buddhist minister.  In 1960, he did post graduate work on religious education at the Pacific School of Religion and the Buddhist Studies Center (now the Institute of Buddhist Studies in Berkeley, CA) under Dr. Fujiwara and Reverend Fujitani.

He married Masako Deguchi in 1963 and was married for 42 years.

Sensei worked for Buddhist Churches of America (BCA) as Sunday School Material Department Trainer and Director for 13 years.  During that period, he traveled to many BCA temples and churches to promote the Dharma School curriculum.  He then served as resident minister at Placer Buddhist Temple for 14 years (1976-1990).  Sensei is also credited for helping build up the Toronto Buddhist Church, assisting Reverend Tsuji.  As a retired minister, he spent 24 years at the West Los Angeles Buddhist Temple assisting Reverend Oda and Reverend Usuki.  He then moved to Sunnyvale and started attending Mountain View Buddhist Temple, (MVBT).

Reverend Nekoda’s ties to MVBT go back to 1962, when the first YBA Building Obutsudan/Hondo was completed.  He knew Reverend Sensho Sasaki (MVBT’s first resident minister) and was invited to attend the dedication ceremony of the Hondo.  If you look at the old photos in YBA Hall, Sensei is one of the ministers in the photos taken that day.

Sensei also recalls a past speaking engagement at a MVBT Ohigan service (pre-1990).  He was committed to attending the service even though he was convalescing from a fever.  He remembers asking his wife to drive him to Mountain View.

In 2014 he moved to a retirement home in Sunnyvale.  He will always remember Richard Endo for driving him back and forth to MVBT for services and activities.

Last year, at MVBT’s 2019 Keirokai, Reverend Nekoda was honored for his 100th birthday.  Sensei was happy to receive congratulatory cards especially from the Dharma School students who wrote him letters as he believes in the importance of Dharma School.

MVBT thanks Reverend Nekoda for his decades of service to spread the Buddha Dharma.

We wish him a HAPPY 101ST BIRTHDAY!

Rev. Nekoda folded this tsuru in 2019