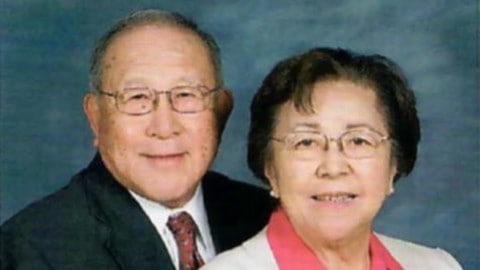 Dedication is a word that truly defines Dr. Charles Tsuneo Uyeda.  I came to this conclusion after spending the last two months getting to know the man many know as “Chuck.”

Chuck was born to Tsunesuke and Kiyo Uyeda in Penryn, California. He grew up on the Uyeda Family Farm in nearby Rocklin with his three sisters (Shizuye, Mitsuye and Etsuko) and two brothers (James and George).  His father passed away in November the year before Chuck was born due to an infection from appendectomy surgery.  According to Chuck, this event could have been a reason for his dedication to his career in the microbiology field.

During World War II, Chuck was incarcerated at Arboga Assembly Center, Marysville, CA; then went to Tule Lake Relocation Center, Tule Lake, CA; and finally in Heart Mountain, Wyoming.  In Heart Mountain, he was active in Boy Scout Troop 333 and was a patrol leader.  At the end of the war, his family returned to the farm in Rocklin where he graduated from Placer High School in 1946.  His remarkable academic career included an Associate of Art Degree from Placer Junior College, Bachelor of Science Degree in Biological Science from San Jose State, Master of Science Degree in Bacteriology from Miami University in Oxford, Ohio, and PhD in Medical Microbiology from Stanford University in 1956.

Reverend LaVerne Sasaki, who was a close family friend to Chuck and his late wife Sumi, recalls, “I still remember visiting Dr. Uyeda as a ‘germ specialist’ at UCSF.  He showed me his study sample of human feces!  I have never seen this as a medical sample.  My first reaction?  What dedication to advancing medical knowledge and well-being!”

After graduating from Stanford, Chuck learned that he would soon be drafted for military service.  He decided to accept a commission as a First Lieutenant in the U.S. Army’s Medical Service Corp.  His service included being assigned to be the Chief of Diagnostic Bacteriology Section at 406th Medical General Laboratory located in Camp Zama near Tokyo, Japan.  Upon the news of his pending overseas duty, he and his then fiancée, Sumi Maeda, married in San Antonio, Texas, and moved to Japan during his two year tour.  While there they made time to visit their respective ancestral homes in Wakayama and Hiroshima.

Upon return from Japan, Chuck was stationed at Ft. Baker near Sausalito.  They stayed at the Presidio of San Francisco and their son Bud was born in 1958.  Chuck completed his active duty tour in 1958 and went on to serve in the Army Reserves for over two decades.  He achieved the rank of Colonel when he retired in 1986 after 30 years of total military service.

Chuck also had a very active and long career as the Chief of Microbiology at the Veterans Affair Medical Center in Oakland and in Palo Alto for a total of thirty years.  In 1963, the couple moved to Mountain View where their daughter Carol was born a year later in 1964.

Chuck and Sumi’s early years in Penryn brought them close to the Placer Buddhist Temple where they got to know Reverend Sensho Sasaki and his wife as well as their son, Reverend LaVerne Sasaki.  Reverend Sensho was the resident minister of Placer Buddhist Temple prior to his service at the Mountain View Buddhist Temple.  After Chuck and Sumi moved to the Bay Area, they joined the MVBT Sangha in 1963.  While their 58 years as a member of MVBT is monumental, it’s not the number of years that is impressive, it’s the level of commitment and service that is special.  Chuck still serves as one of the Board of Directors for Zone 8 and also previously for Zone 11.  He still remains active in ABA in which he and Sumi were charter members and he served as Recording Secretary for 15 consecutive years at one time.

For many years, Chuck and Yosh Tokutomi (and their sons) prepared and ran the parking lot area during the Obon Festival & Bazaar.  We reminisced about the times where Chuck and his “Parking Lot Crew” would direct traffic with dirt bikes.  After being “promoted” from parking lot duties, he took an important role in assisting Sumi with running the very successful Bazaar Bookstore.  The bookstore was like a family affair with the help of son Bud, daughter-in-law Libby, daughter Carol, son-in-law Neil and grandchildren.

According to Reverend LaVerne: “Sumi was one of the most active leaders of the MVBT Dharma School along with Amy Imai, Frances Sawamura and Esther Bunya.  Also Rev. Bill Briones (current Rimban at the Los Angeles Hompa Hongwanji Buddhist Temple) was a MVBT Dharma School teacher then!”

One of Chuck’s crowning achievements at MVBT was the creation of the Senior Activities Committee along with original members that included Amy Imai, Alan Nara, Miyo Takegami, Richard Endo and Yas Shimoguchi in 2002.  Aiko Sugimoto-Miyamoto joined in 2005 when she started the craft program.

Aiko says “The Senior Activities and Craft Program is focused on Seniors, male or females.  We have line dancing, card games, including Japanese card game, Sing Along and a light chair exercise.  We also provide light refreshment with coffee and tea.  We provide lunch once a month with possibly a guest speaker or some activity to make it interesting for the day.  Craft is another fine feature for our senior ladies.  When we take our Reno trips, we show movies and Chuck would be the one to handle the movies for me.  We worked well together.  I have known Chuck over 45 years, a wonderful friend.  How time flies.  My daughter and Chuck’s daughter were friends in Sunday School (name prior to being called Dharma School) starting when they were in the 4th or 5th Grade class.  Now they are in their late 50s.  He was so devoted to his late wife and always talked with respect which always impressed me.  [Chuck] is a very dedicated person and he always gets things done without hesitation.  A quiet and gentle man. I  am fortunate to be his friend.”

Through Shinran’s teachings, we learn to live our lives to the fullest, becoming aware of both our potentials and limitations in this world.  Because we are able to overcome all the difficulties, we can thus realize true happiness within this life time.  Chuck embodies these teachings and shows us through his life’s actions that he truly is a good Buddhist.  We recently spoke about an important trip he took with other members of our Temple to the Stupa at the Buddhist Church of San Francisco in 2015.

Chuck stated, “It was a wonderful opportunity for us to see and be with sacred relics associated with Buddha and also special because we were able to meet and have lunch with then Bishop Umezu and recently retired Reverend Kobata.  It was a beautiful day to be able to share this special outing with very close friends in our MVBT Sangha.  Jodo Shinshu Buddhism or Pure Land Buddhism has become a significant part of my daily life after the passing of my dear wife Sumi over two years ago and I was kindly reminded by Reverend Mukojima that ’Sumi-san is always with us as our Buddha.’  With that insight and understanding, I have learned to live my life with gratitude, humility and compassion!  Thus, a visit to the Stupa in San Francisco containing the relics of Buddha was a way for me and other members of our Sangha to honor and express our gratitude to the founder of our religion.”

After reaching out to Chuck’s close family and friends, it was clear that he is loved and respected by many.

Julie Ushiba remarks, “We shared a common interest in Enka (a type of Japanese song) and karaoke singing.  With his wife, Sumi, we used to get together for karaoke and pot-luck dinners practically every Saturday night for over 35 years.  He enjoys singing “Itsudemo Yumeo,” “Dareka Kokyoo Omowazaru,” and many other songs.  Some of his favorite Japanese singers are Junko Ishihara and Ayaka Hirahara.  Chuck sings with 100% concentration and has a sexy baritone voice.  We love to see his joyful giggling, laughter and humor.  He is very proper, honest and enjoys life. He is a real gentleman.”

Miyo Takegami, a long-time friend, exclaims “I have known Chuck for many years, can’t recall the exact number of years, but our children attended the same school together and have kept in touch and now they have children of their own.  Chuck is very amiable, thoughtful and considerate of others, discreet, cooperative and a very competent, tireless worker.  You know that whenever he is assigned a specific job, that it will be accomplished quickly and well!  He has been an invaluable asset to our Senior Activities Committee for 20 years and to our Temple for much longer, and I’m sure he will continue to contribute his talents and knowledge for the betterment of all,”

His niece, Susan Higashi Rumberg (current Placer Buddhist Temple member) highlights, “I am so proud to be one of Chuck’s many nieces and nephews. He is an inspiration to our family and my role model.  My uncle’s life epitomizes the values and characteristics we try to instill in our own kids and grandkids: an emphasis on family, education, integrity, and hard work.  During the last several years, my cousins and I have regularly driven to Sunnyvale for the day to visit with Uncle Chuck and Auntie Sumi.  It is a day filled with much laughter and reminiscing.  Uncle Chuck is the last surviving Uyeda sibling, so we relish his stories about our extended family and growing up on his family’s ranch because it makes us feel as if our own parents are still with us and gives us a greater appreciation of our Uyeda roots.”

Susan adds, “His sense of gratitude stands out. With his usual modesty and humility, Uncle Chuck always credits his mom’s and siblings’ love, support, and sacrifices on his behalf.  His gratitude always shines through when he describes the many opportunities they provided him.”

As a lifelong fan of the San Francisco Giants and 49ers, he is as dedicated to his favorite sports teams as he is to his family and friends.  When I met Chuck at his home in Sunnyvale in June, he showed me an impressive display of sporting memorabilia celebrating many of the sports heroes over the years.  Thinking back to that day, in the presence of Montana, Rice, and Posey, the biggest legend of them all undoubtedly was Chuck Uyeda.