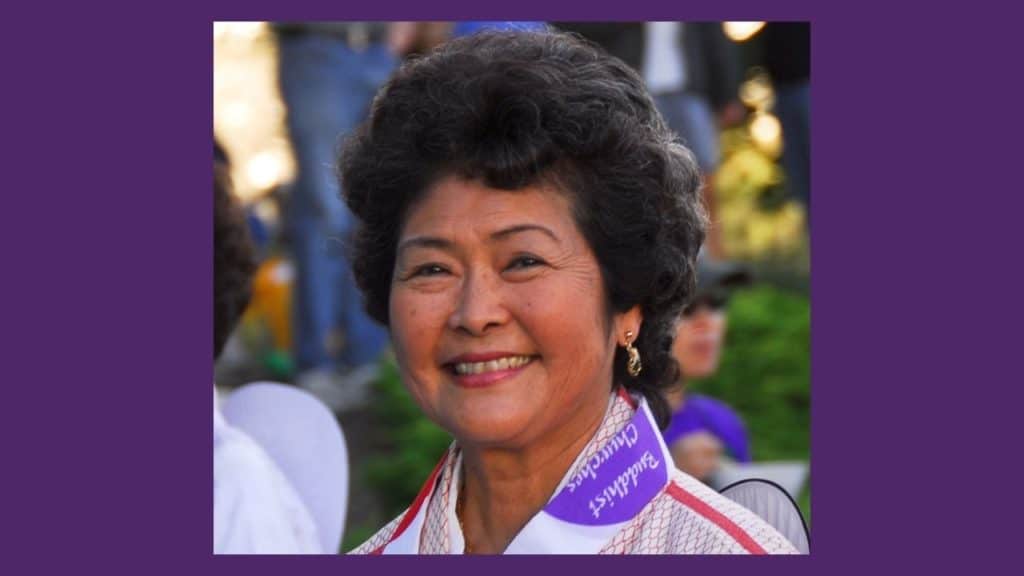 Aiko Sugimoto-Miyamoto is a long-time and well-respected member of the Mountain View Buddhist Temple Sangha.  Her contributions to the development of the MVBT Sangha is a demonstration of Dana nature – generously helpful and kind to all.

Grew Up in South Bay

Aiko grew up in the South Bay with eight siblings and her parents worked every day in the field.  According to Aiko, “We grew up taking care of each other.  We learned to make up our games, such as, kick the ball, Annie-Annie Over, marbles and many more.  On the farm, our mother bought baby chicks and raised them to provide fresh eggs.”  Running in the wind was her favorite activity so when she was nine years old, her mother signed her up for Japanese dance lessons.  Aiko says, “Maybe she wanted me to be more graceful, especially with the three older brothers. It wasn’t something I enjoyed, but I took lessons for 3 years.”

In 1954, her family moved to a ranch in South San Jose and she finished high school at James Lick High School.  It was not very long thereafter that she met her future husband, Sam Sugimoto, through a mutual friend, after a basketball game.  After their marriage, the couple bought a home in Santa Clara and soon started a family.  When their first son, Jeffry was ready for Sunday School, they joined the Mountain View Buddhist Temple.  Aiko says, “With the years passing, I am truly blessed with four children: Jeffry, Jaymi, Jere and Julene, who are all healthy and well.  One of my main reasons in joining the Temple was to have our children make friends within the Japanese community.”  During the kids’ formative years, Aiko and Sam got involved with the Tri-City Association for their sports activities and spent 13 years involved with their sports and community activities.

In 1966, Aiko started working for Signetics Semiconductor, which was bought out by Philips Semiconductor 10 years later (currently NXP Semiconductors N.V.).  Aiko moved into different positions throughout the company and settled into the document department as a word processor working directly with the engineers to change their specifications.  After 36 years, she retired in December 2002.

Throughout this time, Aiko became more involved with the Temple, making new friends and also helping Sam’s aging parents.  The Temple’s choir was created and flourished thanks to the inclusion of Aiko’s beautiful singing voice.

Aiko was familiar with most of the MVBT Dharma School teachers and was approached by May Shimoguchi to help teach.  Over the course of 45 years, Aiko taught various grades and served as Dharma School Superintendent for three years.  According to Aiko, “Today, it is wonderful and heartwarming to see the next generation bringing their children to Dharma School.”

In 1982, Aiko attended the WYBL (Western Young Buddhist League) Conference as a YBL advisor.  In the San Jose auditorium, she struck up a conversation about “odori.”  This encounter led to an enduring friendship with Hideo and Ruth Harada from Ontario, Oregon.  “From 1982 to 2003, we have taken our weeks’ vacation in Ontario . Their son is Bishop Marvin Harada.”

Sam too was active with MVBT where he was needed.  An avid and experienced fisherman, Sam provided and prepared the tuna for sale at the Obon Bazaar; taught fly fishing, on how to cast and make your own pole through the Friday Fun Night Program; helped Nakayoshi Gakko by demonstrating and explaining how to cut fish; and started the Tuesday night basketball.  With ABA, he co-chaired the ABA Luau with Sets Kuboyama, a big fundraiser.

Sadly in 2003, Sam passed away with lung cancer.  It was difficult time for Aiko, but with the help of her children, family and the Temple, she kept busy.  Rev. Koyama had just started the early morning chanting program.  “I joined as it gave me a lot of comfort to chant,” says Aiko.  This group is now the Sunday Oasaji program, which has flourished under the leadership of Ken Nakano.  “Ken has taken the time to educate us on the set up [of the Onaijin] and proper procedures and schedules for each service.”

In 2004, then Temple President, Richard Fujikawa called and said “Aiko, you have many friends.  The Board wants you to be President-elect.”  Aiko was shocked, so she called her long-time friend Amy Imai and asked for her advice.  Amy said “you could do it” and that she would support Aiko.  Aiko accepted and became the first woman President-elect in 2005, and then President in 2006 of the MVBT Board.

At that time, Aiko thought “Now I can be heard.”   For some time, she wanted to start a weekly Senior Activities and Craft program.  She told Rich Endo about her idea and he said “Go for it”.  In 2002, the Senior program was launched with the guidance of Rev. Jay Shinseki.  This program has evolved into a vibrant and popular program that includes line dancing, card games like Shanghai and Japanese/Hana, Sing Along, chair exercise, social time and, of course, crafts.  During the COVID-19 shutdown, the Senior Activities Group has halted in-person gatherings, but they look forward to the day when they can all get together again.

In 2005, Aiko had a chance meeting with Tom Miyamoto.  They had known each other many years prior.  A mutual friend, reintroduced them and they were married on December 28, 2010.

When the Temple started planning a 50th anniversary event, Amy Imai asked Aiko to co-chair the organizing committee.  The event was planned for 2011 and provided another great challenge for Aiko.  She jumped in with both feet.  Under Amy and Aiko’s leadership, the committee organized a successful celebration.

Aiko has been involved with MVBT since about 1962.  She states “I have been fortunate and privileged to work and learn from each one of the ministers: Rev. Sensho Sasaki, Rev. Laverne Sasaki, Rev. Russell Hamada, Rev. David Matsumoto (temporary), Rev. Jay Shinseki, Rev. Dean Koyama and our current Rev. Yushi Mukojima.  Rev. Mukojima is respected by many as he is a caring, personable and a humble minister.  We hope he will be with us for a long time.”

Currently, everyone is struggling with the coronavirus pandemic.  Aiko finds it “gratifying to observe the power and strength our Temple has shown during this pandemic.  It is reassuring that the Temple Board and organizations have continued to bring and focus on sharing the activities being held at the Temple via Zoom and YouTube.  Foremost, being able to observe and connect us with the various Temple is proof that our Sangha will continue to be strong and successful for generations to come.  I say this with great pride and am truly proud that I belong to the Mountain View Buddhist Temple.”

The MVBT is proud to have Aiko Sugimoto-Miyamoto as a respected and beloved member of the MVBT Sangha.  We thank her for her decades of commitment, compassion and leadership.